Knowing what your drone is made of is part of the ride.

What’s more, by knowing what materials and components a drone is made of, you can even build your very own drone.

And if you are not interested in that, at least you will have a lot easier time when it comes to maintenance, repair work, diagnosing problems, and even flying your drone.

What are drones made of? Drones are made of a variety of materials, including but not limited to, thermoplastic polymers, fiberglass, or carbon fiber. Most drones use electric motors, which are powered by Li-ion batteries and controlled by the remote controller and the internal flight controllers, which are made of different systems and sensors.

Of course, you do not necessarily need to have in-depth knowledge and understanding of each part, but by staying informed of the anatomy of your drone, you can be a better pilot.

Those of you curious for more will find a more in-depth look at the various components drones are made of below.

The Anatomy of a Drone Although on the outside, drones may look very different, deep down on the inside, they are very similar. The reason for this is because—to a large degree—they are made from the same parts.

Of course, there will be some slight differences, but there are some components that you will almost always find in a drone.

The frame is where all drone parts will be housed and secured to—this is the skeleton of the drone.

The frame is what keeps everything together. Thus a material that is light but still sturdy and strong enough is needed.

There is a variety of different components the frame can be made of like:

You will also find landing gear and other attachments like propeller guards and more.

On the most conventional drone models, you will find electric motors. The number of the motors will depend mostly on the type of the drone—a quadcopter has four and an octocopter, eight.

These motors are also set up in a special way.

For the drone to remain stable, it needs to have its motors counteracting each other. This is why, on a quadcopter, two motors will be turning clockwise, and the other two will be moving counterclockwise.

This also leads to a few interesting facts. First, diagonal motors spin the same direction. And secondly, the front motors spin inwards while the motors on the back outwards.

Some of the higher-end, especially military-grade drones, may be equipped with a standard fuel-powered engine while other more hobby-geared drones may be using nitro engines. What good is a drone without any propellers? The propellers are responsible for the drone actually flying.

Propellers are as different and unique as each drone. They come in a variety of different sizes and styles. But one thing makes them similar—their design.

Propellers have a leading and a trailing edge. The leading edge is the one which is higher, and the trailing is the lower edge. When the propeller starts spinning, this design creates a certain amount of air pressure, which will push the drone up.

This is why the placement of the propeller is critical, as it is meant to spin towards the leading edge. There is no way a drone can go up in the air without an energy source.

Electric drones are powered by a battery, while fuel-powered drones will take different kinds of fuel or fuel mixtures.

There are two main types of batteries used in drones: LiPO and LiHV. The main difference between the two is mostly in terms of voltage, which is also in direct relation to the number of cells the battery has.

When it comes to batteries, the voltage will affect the speed of the drone’s motor, and the amperage can be used to determine for how long the battery can supply the needed power.

The battery affects flight time, and this can be considered one of the main downsides to modern drones. There is an inevitable sacrifice that needs to be made in finding the right balance between capacity and size of the battery.

The capacity of the battery limits how long the drone can stay up in the air. The current best-performing drones are capable of flying up to 35 minutes in optimal conditions. And the majority of the entry to mid-range drones fall in the 5 to 20 minute flight time ballpark.

The flight controller receives valuable information from the other components like the obstacle avoidance sensors, the GPS module, the compass, gyros, remote controller input, and more.

Then it processes all that information and sends the needed signals to the ESC.

These actions can be very simple, like turning to the left and altitude maintenance, to a lot more complicated ones like automated flight and obstacle avoidance at the same time, and so much more. 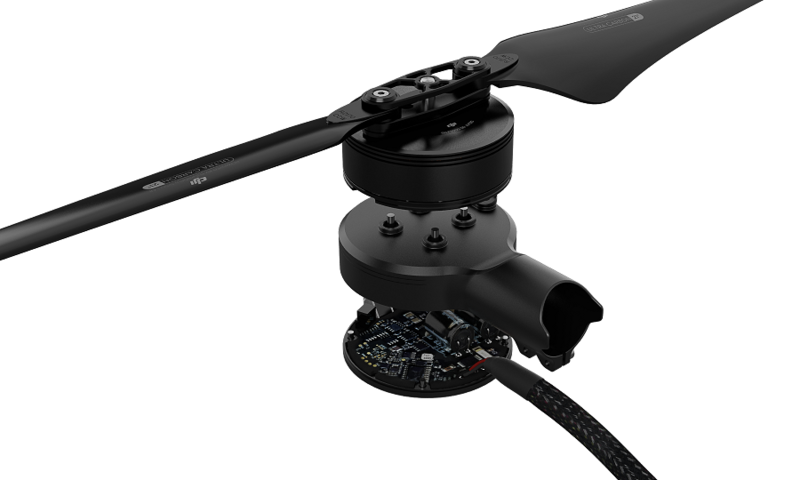 The electronic speed controller (ESC) is one of the main components that affect how the motors are powered.

It is connected to the flight controller and the battery and serves as an intermediary between them and the electric motors.

Without a proper communication system, there’s hardly anything you can do with your drone as this is how the communication between the remote controller and the drone is carried out.

The communication system consists of a transmitter and a receiver.

Depending on the drone, the way the transmission works may be very different. Usually, the transmitters work in the 2.4 or the 5.8 GHz spectrum. The transmission system will also affect the distance at which you can fly your drone.

There are a few different transmission standards that drones may be using like Bluetooth, Wi-Fi, FHSS, and DSSS. Some drones may even be operating at the ISM radio signal spectrum.

Certain drones that are capable of video transmission and FPV may even have additional video antenna and video transmitter, which take the signal from the camera and send it to the controller device or the FPV goggles. 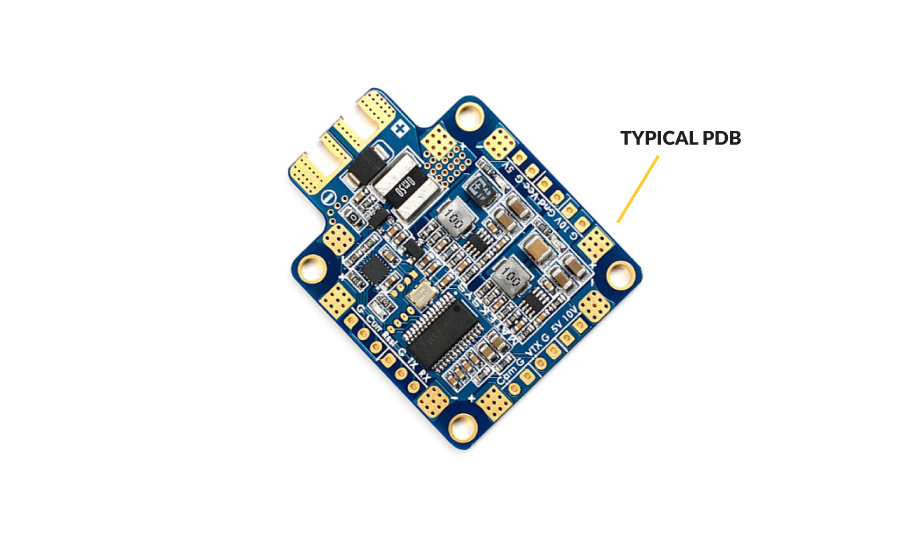 The power distribution board (PDB) is the main board responsible for the distribution of the power from the battery to the different components of the drone. 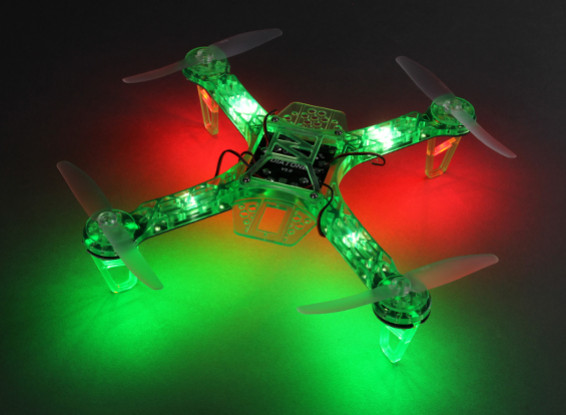 LEDs may seem like something trivial, but they are more important than one may expect.

The lights allow the pilot to easily spot and keep track of the drone.

Red lights are always installed on the front of the drone while green lights are placed on the back.

Modern drones can be equipped with all kinds of different sensors:

There are also other sensors that, although rarer, may be found on certain drones like rangefinders, light detection sensors, and magnetometers.

The GPS is an irreplaceable component of any modern top-end drone.

Drones usually use the two main GPS networks—the Russian and the American—to calculate and track their movement more accurately.

The information from the GPS networks travels between the satellites and the drone. It literally takes a fraction of a second.

Using that information, drones are capable of figuring out where exactly in relation to everything (especially the lift-off area) they are located. This allows them to maneuver obstacles, map out areas, return back home on their own, and so much more.

Not all drones will have a camera. You can expect to find a camera on mid to top-end drones.

Of course, the old adage that you get what you pay for is in full effect here. On the more professional and prosumer drones which have been built for aerial photography, you will find some high-tech cameras capable of shooting breathtaking images and scenes.

Some cameras will be attached to the drone directly, or alternatively, there could be a gimbal in which case there may also be a gimbal motor and controller, which will control the movement and orientation of the camera.

What Is the Drone Controller Made Of?

Drone controllers are not very different from many other RC toy controllers.

The controller is equipped with a receiver and transmitter, which creates the necessary link between the drone and the pilot.

There will also be a number of buttons and switches that will control different aspects of your drone like power switches, power, rudder, and elevator trims, and more.

High-end and prosumer drones will also come with controllers that require a smart device like a smartphone or a tablet in order to work. The smart device is used for sending and receiving signals, including the video signal. Certain drones can even be controlled directly from the said smart device.