I am sure you have seen the many different beautiful shots from drones flying high above – stunning images that can leave anyone breathless.

But have you noticed that they usually have some nice music playing over in the background? Very rarely, if at all, you will see drone footage that has its own original sound. But why is that?

Do drones record sound? Drones do not record sound because they do not have a built-in mic. An external mic can be attached to the drone to record sound. However, the mic will capture the prop sound and prop wash, which usually ruins the audio. Alternatively, some drones can allow you to record sound using your controller device.

All this may sound very demotivating. But stay with me on this; things may not actually be so grim.

Below I explain everything you need to know about drones and recording sound.

Many new drone owners may not realize it until they import their newly recorded high res video to their computer, but the majority of drones cannot record audio

Drones, in general, do not have a microphone on them so they cannot record sound. This may seem like a huge oversight, but it is not.

There are not a lot of sounds that can be recorded while flying your drone several hundred feet in the air. And even if you keep the drone low to the ground, the buzzing from the drone’s blades is going to render pretty much all the audio useless.

Even if there were anything worth recording, you would only be hearing the prop’s noise.

Of course, these buzzing sounds can be filtered and removed if you have access to good sound editing software, but the end result will be questionable.

When we are talking about editing or removing out some very low humming noises, for example, a computer fan noise, or a running AC, this can be done by using noise gates or noise reduction. These options are very effective, and people use them on a daily basis when recording audio.

However, the noise of the prop is a little different. The problem comes from the fact that the source of the noise is too close to the recording device.

At this point, even an audio editing software will not offer much, if anything at all. It can still be used to edit out the noise, but usually, this will distort the rest of the sounds too much.

Unfortunately, the sound from the prop is just too overpowering.

Why Can Drones Not Record Sound?

The electric motors drones have are what allows them to fly. Unlike gas engines, electric motors are very quiet, but that doesn’t mean that they don’t produce any sound at all.

The electric motors will be generating a constant level of low humming noise that will be recorded by the microphone.

In order for a drone to fly, the propeller blades displace high volumes of air.

This is known as prop wash, and it is extremely loud. This sound will be captured by the microphone and will ruin the audio recording.

Even if you somehow made the prop completely silent, you took care of the electric motor’s noise and the loud prop wash; there is still the problem with the noise from the wind.

The fact that the drone moves in the air will create a wind noise around the mic, which can make the sound very unpleasant.

Check out our suggestions of the Best Drones for High Winds.

Omnidirectional microphones will pick up sounds from all directions, which means that all the unpleasant buzzing sound will be recorded.

Unidirectional (Cardioid and Hypercardioid) will pick up sound from one direction and are a better choice for recording sound where there is more than one source of noise. A Cardioid microphone is arguably the way to go in this case.

Bidirectional microphones record sound from two directions and are not going to be useful in this instance.

Are All Drones Unable to Record Sound?

There are drone owners that would just love being able to record sound from the flight of the drone.

Now you know what you can expect in terms of sound quality, but with that being said, some drones do come with audio recording devices.

For example, the Karma Drone by GoPro comes with a GoPro camera. Certain GoPro cameras do have a built-in microphone that can record sound from the flight. Keep in mind though that the default settings could be set to mute initially.

Other drones can also come with grips that can hold phones or external cameras, which could be used in a similar manner to record the sound from the flight.

Although this may resolve the problem with the lack of a microphone, it does nothing to fix the issue of the prop’s sound and the fact that it is still going to be too overwhelming.

How to Record Sound With Your Drone?

With that being said, not everyone is going to be happy with using their drone for beauty shots alone.

If you want to provide some voice over or commentary, talking about the history of the place you are flying over or something else entirely, there are still some viable alternatives.

One of the most common ways to record sound is to use a standalone voice recorder that you attach to yourself.

Of course, this will record the sounds at the place where you are at, your voice, the people around you, the prop’s sound if it is close to you, etc. It will not record the sound from the flight.

One of the problems you will stumble upon recording sound this way is that you will have to work on syncing the audio with the video in post-editing.

The most commonly used practice is to start your recordings with one or two claps of your hand, which are used as a reference point when syncing the audio.

This method of recording sounds provides you with a separate audio track that you can add later to the video. Although this is a very easy way to do it, it also requires some technical knowledge and experience using editing software.

Using the Microphone on Your Controller Device

The DJI GO 4 app has a built-in capability of recording sound from the microphone on the device you are using to control your drone. Of course, this may not apply to all drones, mind you.

This means that whether you are using an iPad or an iPhone, you can record sound using its microphone. This will record the sound of you speaking or any other ambient noises which are present around you- it will not record the sound at the drone.

The sound file, therefore, is going to be stored on the controlling device you are using and not on the drone. Then you will need to download the cache separately on your computer in order to be blended in with the video cache from the drone footage.

The DJI Go 4 App is compatible with the majority of the modern DJI drones like the Phantom 4, Mavic 2, Pro, Air, and Spark.

All you have to do is enable the option for caching the transmission video and then enable the sound recording on the app. These options can be found in the menu under general settings.

Mounting the Microphone Under the Drone 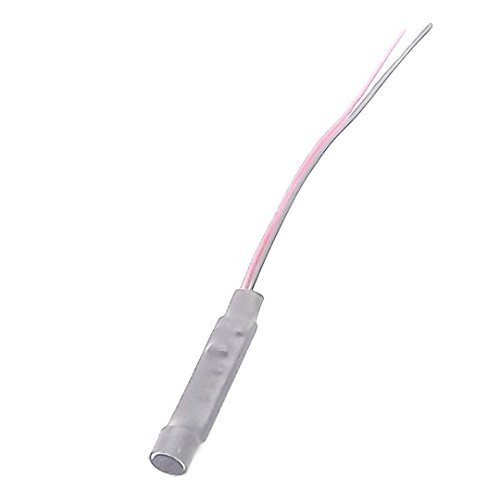 Some drone owners like to mount a microphone 20 to 30 feet under the drone. That way, the buzzing sound is minimized as much as possible while you are still able to record realistic sounds.

This method of recording sound from the flight of your drone arguably offers the best of both worlds, especially when it comes to recording stereo sound.

However, this does not mean there are no downsides to this method.

Carrying the microphone like that can create a pendulum effect that can destabilize the prop, and the extra weight of the microphone can also reduce the total flying time. And the hanging microphone from the prop can potentially get stuck on trees, power cables.