Not all drones are created equal. Although many of them may look similar to the technology they pack under their shells can be quite different.

If you are here, the chances are, you are looking for a drone that is built for one primary purpose – to be able to perform different acrobatics and stunts.

This may seem like something which is reserved only for the more experienced among us, but that cannot be further from the truth as many stunt drones are perfectly suitable even for the complete beginners.

Stunt drones are usually small, light, responsive, and very fast. Because of their modest size, they can usually be flown without the need for any licensing or registrations. In other words, stunt drones are great for kids and adults alike.

To learn more, continue reading below where I share with you a list of the best stunt drones, their specs, and what you need to know in order to choose the right stunt drone for you.

These are the top 5 best stunt drones you can get for the money: 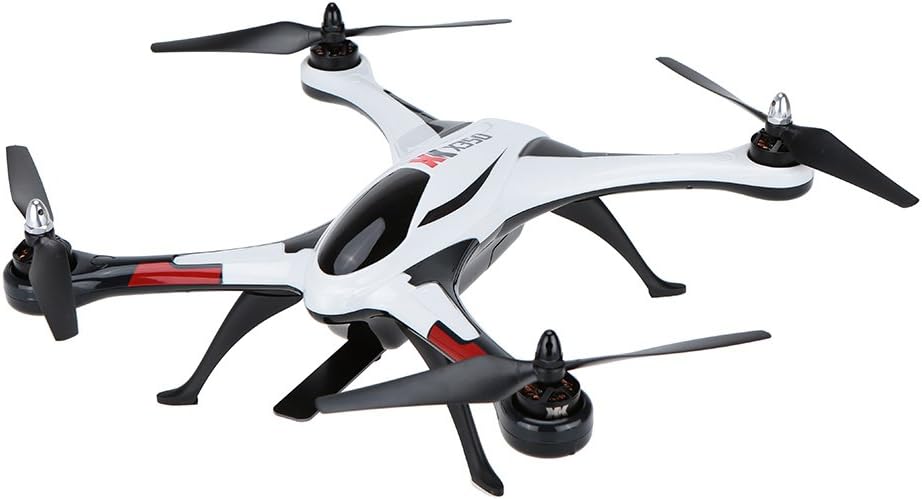 The XK X350 is super fun to fly as it is very quick, maneuverable, and responsive in the air. It has two flight modes:

The propellers are designed in such a way as to allow the drone to not just do 360-degree flips but also to fly upside down. As you flip the drone upside down, using the controller, you can invert the pitch of the blades to keep it flying in the inverted position.

Be careful, though, as it needs a brief moment of time to actually switch between the positive and the negative pitch of the propellers. While doing the flip and switch, the drone will be free-falling for a brief amount of time. So make sure it is flying high enough in order not to hit the ground.

Unlike some of the professional drones designed for aerial photography and video shooting, this does not hold the altitude on its own, as it is entirely manual.

The drone also does not have a built-in camera, but you can fit a GoPro or other type of action camera on it if you like. 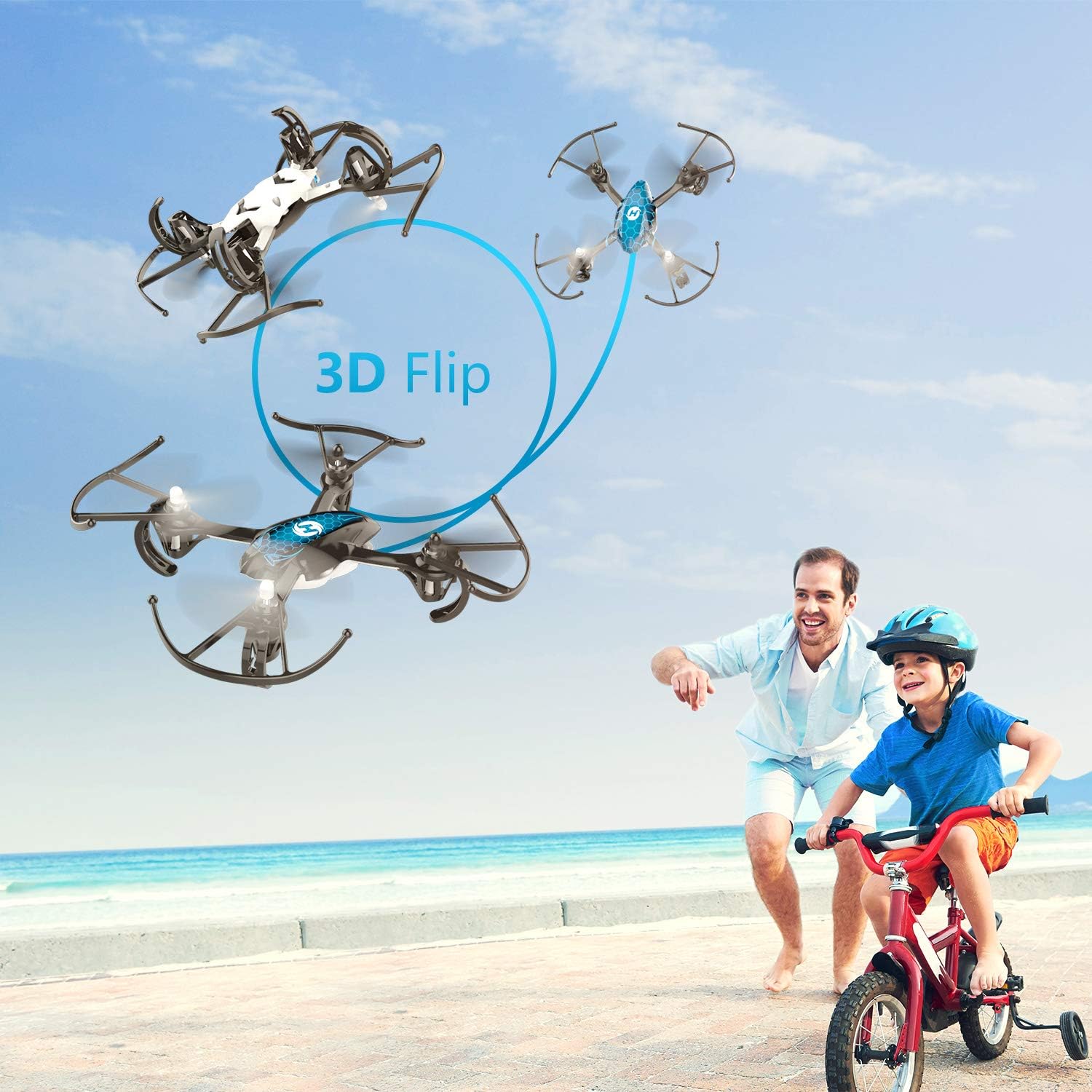 Holy Stone is a well-known manufacturer of drones.

The HS170 Predator is a very small and lightweight model that packs quite the punch. Unfortunately, being so tiny and light means the wind will affect it significantly. Nonetheless, it is incredibly fast, stable, and responsive.

Thanks to the 6-axis gyro, it is capable of safely doing flips and other stunts. All you have to do is push down on the right stick and select the direction of the flip.

It has three different flight modes, so you can learn to fly it at your own pace.

The drone is durable, and you will not have to worry about it breaking easily – plastic guards protect the propellers, and on the bottom, it has four plastic feet that will absorb any bumps during landings. 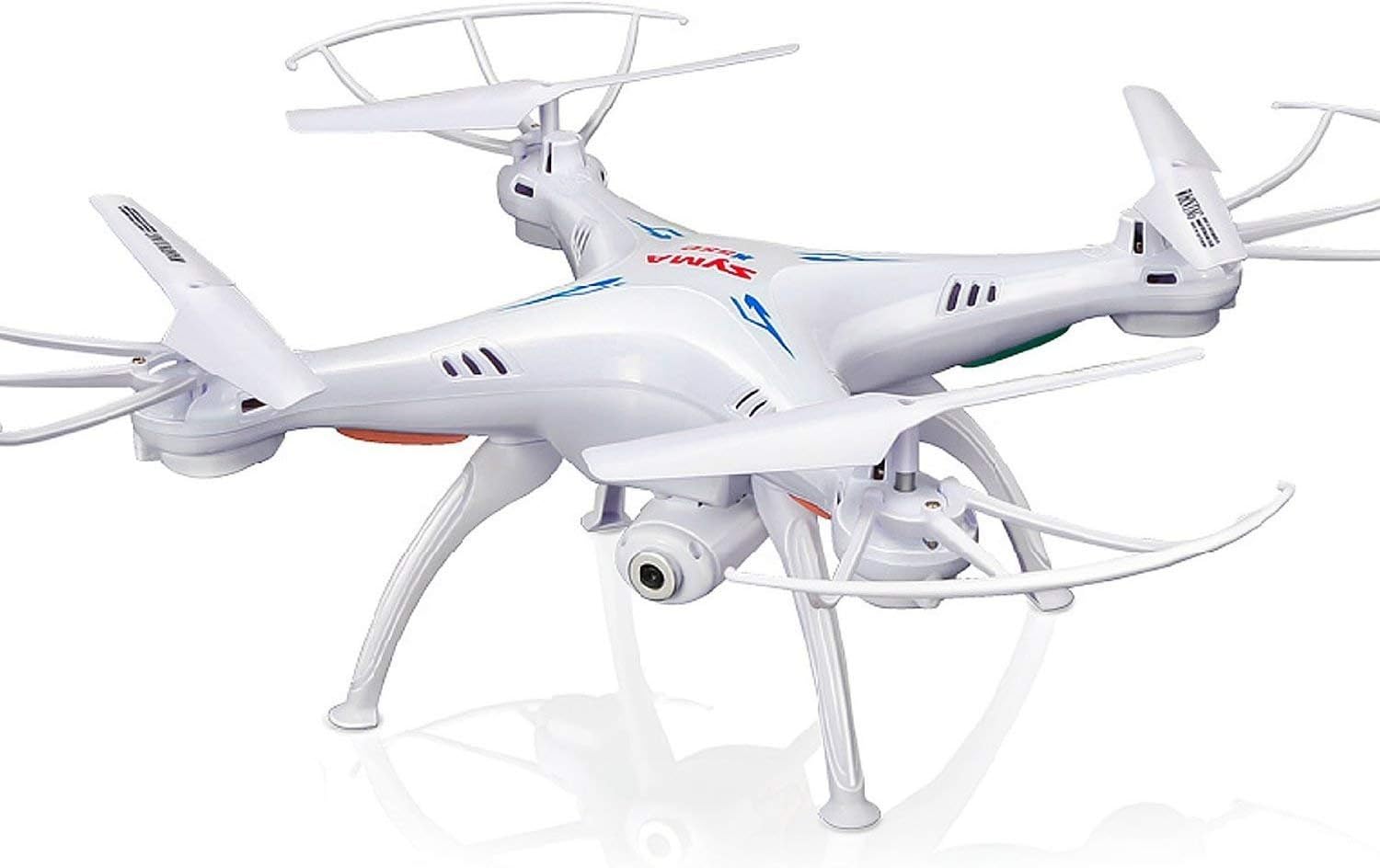 This little bird right here is not just super affordable but also able to do quite a few tricks.

The cool thing about this drone is that it has a built-in camera that you can use to see exactly what the drone sees while flying and performing all of those neat stunts.

It is a very inexpensive drone, and we cannot really expect to see a high-tier camera on it, so as expected, the video quality is going to be of a reasonably low quality. The built-in camera is 0.3 MP, and the live video feed is 480p (4:3) at 30 fps.

Flying this drone is going to be super easy and fun as a result of the extra features it has like the headless mode, the 6-axis gyro, and the propeller guards, which will protect the drone in case anything unexpected happens to it.

The transmission range is average – about 50 meters, so you will not be able to fly it too far away from you.

The only downside, in my opinion, is the battery. It is a 500 mAh battery, which, although fairly decent, feels a little underpowered to me. I would really love to see it with a more powerful battery. 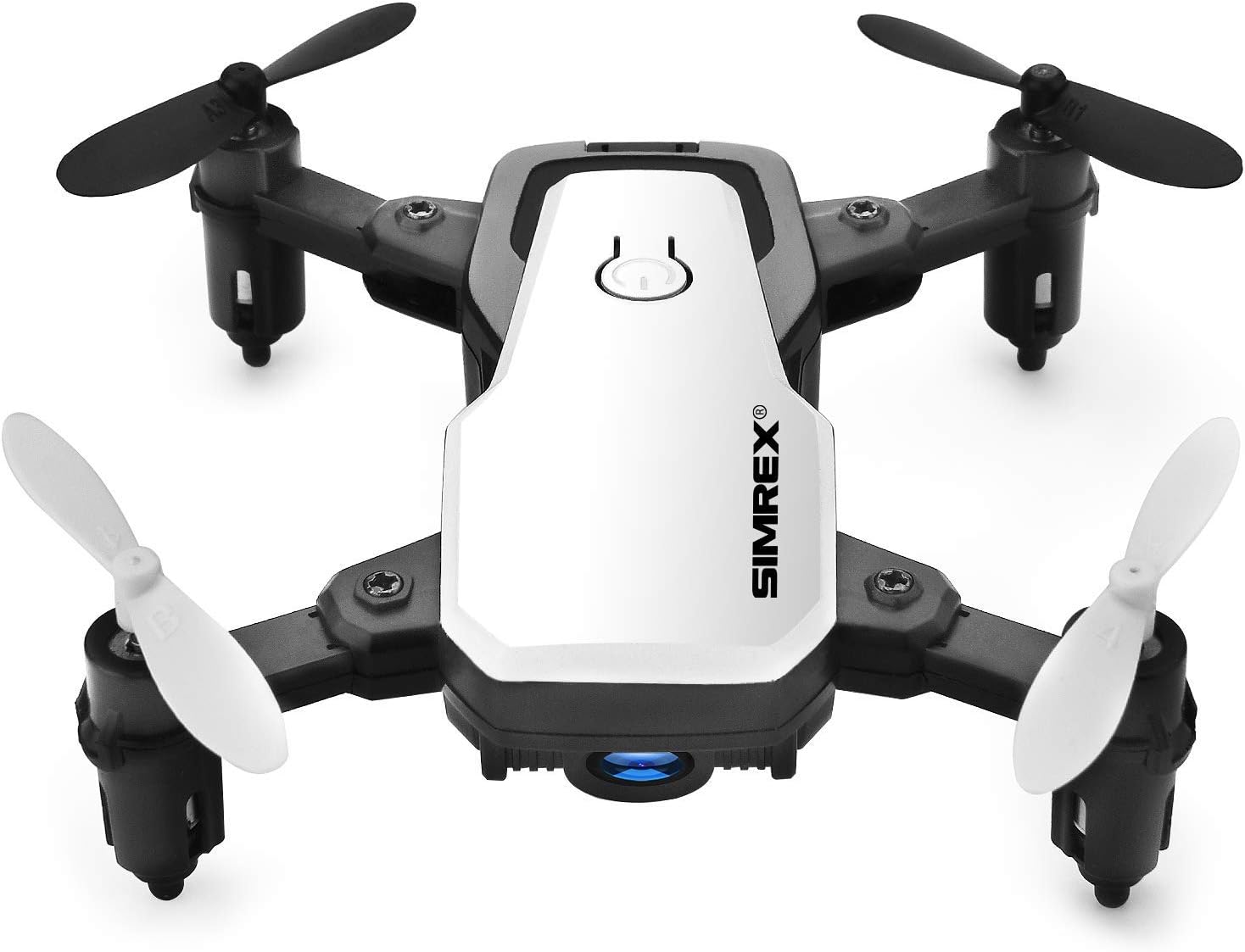 The X300C is one of the top models in this category simply because it offers a lot of advanced features while keeping its price tag very modest.

This is a fun drone to fly. What you get is a drone capable of 360-degree flips, continuous rolling in multiple directions, and three different speed modes.

The drone is lightweight and convenient to use. You can even fly it with your smartphone.

It is perfectly suitable for beginners, thanks to the headless mode and the propeller guards.

The drone also features an altitude hold function and a high-quality camera capable of transmitting 720p footage to your device.

The drone is even FPV ready and can be used with VR goggles. Do you want to take your flying experience to a whole new level? This drone can do it. 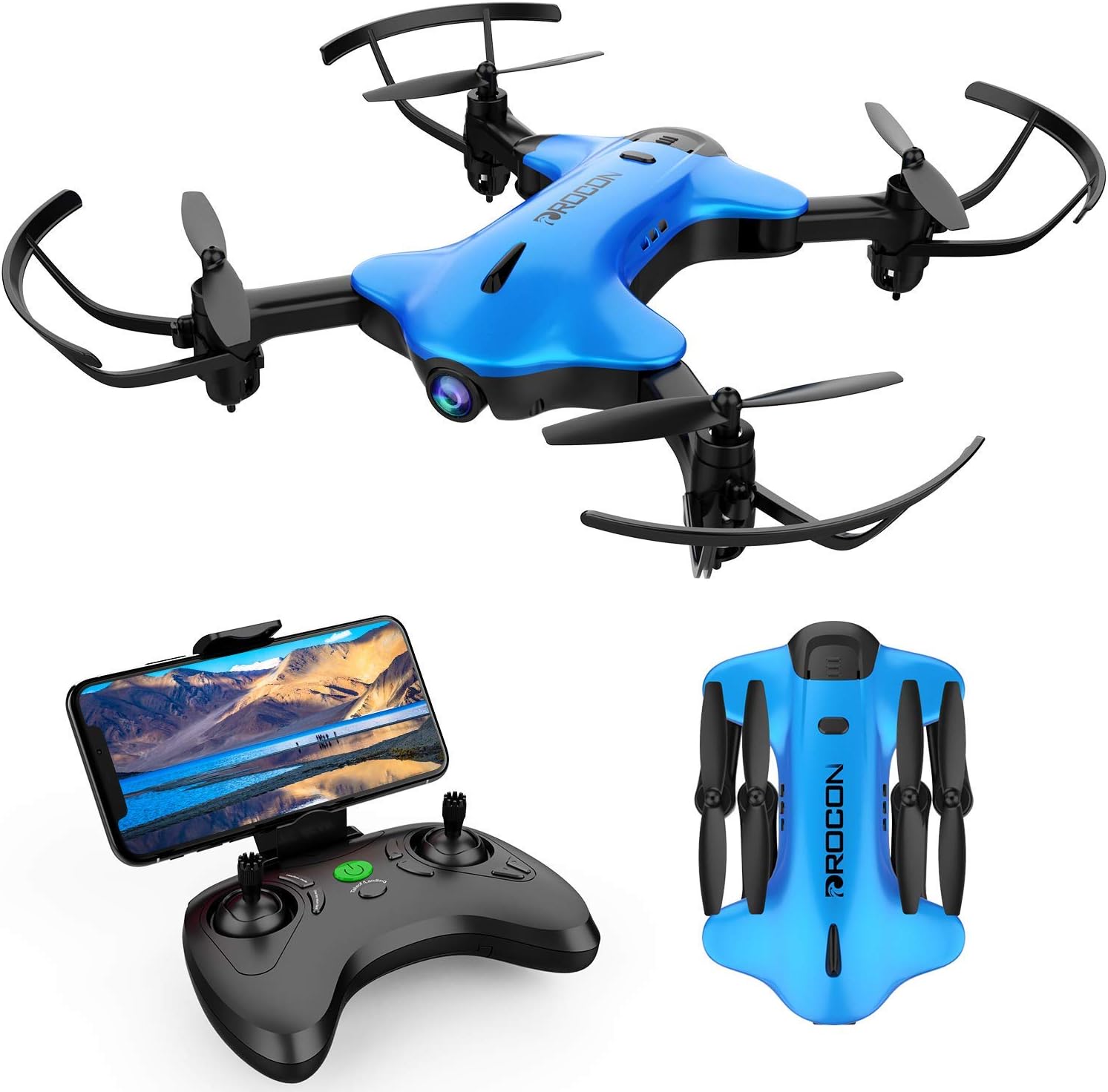 The DROCON Ninja is a perfect drone for beginners that want to learn how to fly and maneuver a drone while performing some neat stunts with it. To begin flying it, all you need to do is press a single button, and it will automatically take off – the same holds true for the landing.

It is capable of maintaining an altitude on its own and has 3 different speed settings, which will allow you to adapt it to your personal liking and skill level.

Even if you are not sure which direction it is facing, the headless mode will keep things simple and straightforward.

It comes with a built-in 720p camera that can capture fairly decent quality footage – nothing super amazing, but at this price level, it is definitely a bargain. 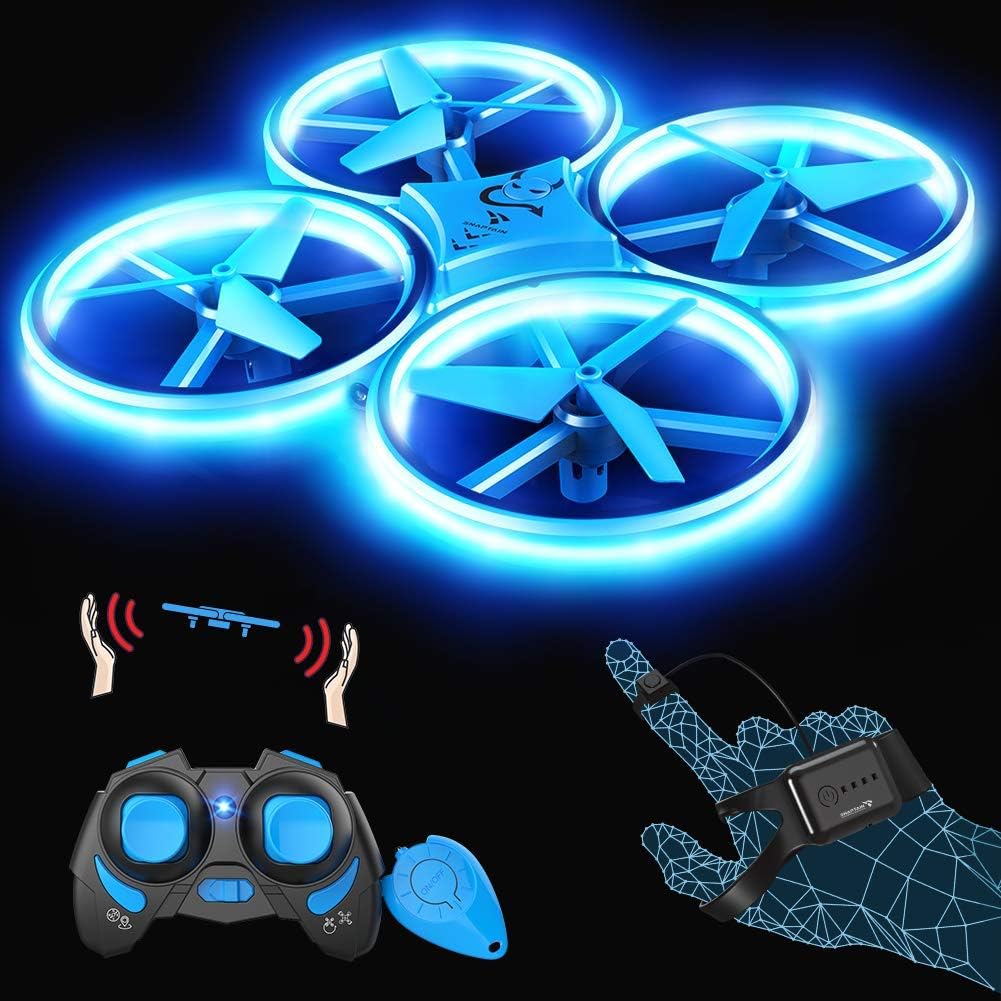 This drone is definitely a looker. Because of the LED strips, you will love flying and doing flips and other aerial stunts with this drone during the night.

The headless mode makes it extremely convenient and easy to use, even if you don’t know which direction the drone is facing. The drone is capable of sensing obstacles and avoiding them too. And even in the event where the drone bumps into something, the propellers will stay protected because they are fully enclosed from all sides by propeller guards.

The drone is perfect for beginners, but the three-speed setting also makes it suitable for more experienced users too.

A feature unique to the SP300 Mini Drone is that you can control with three different controllers, (1) a standard controller, (2) G-sensor watch, and (3) a water-droplet controller.

This is an extremely fun, compact, and easy to fly drone, that will leave anyone pleasantly surprised. 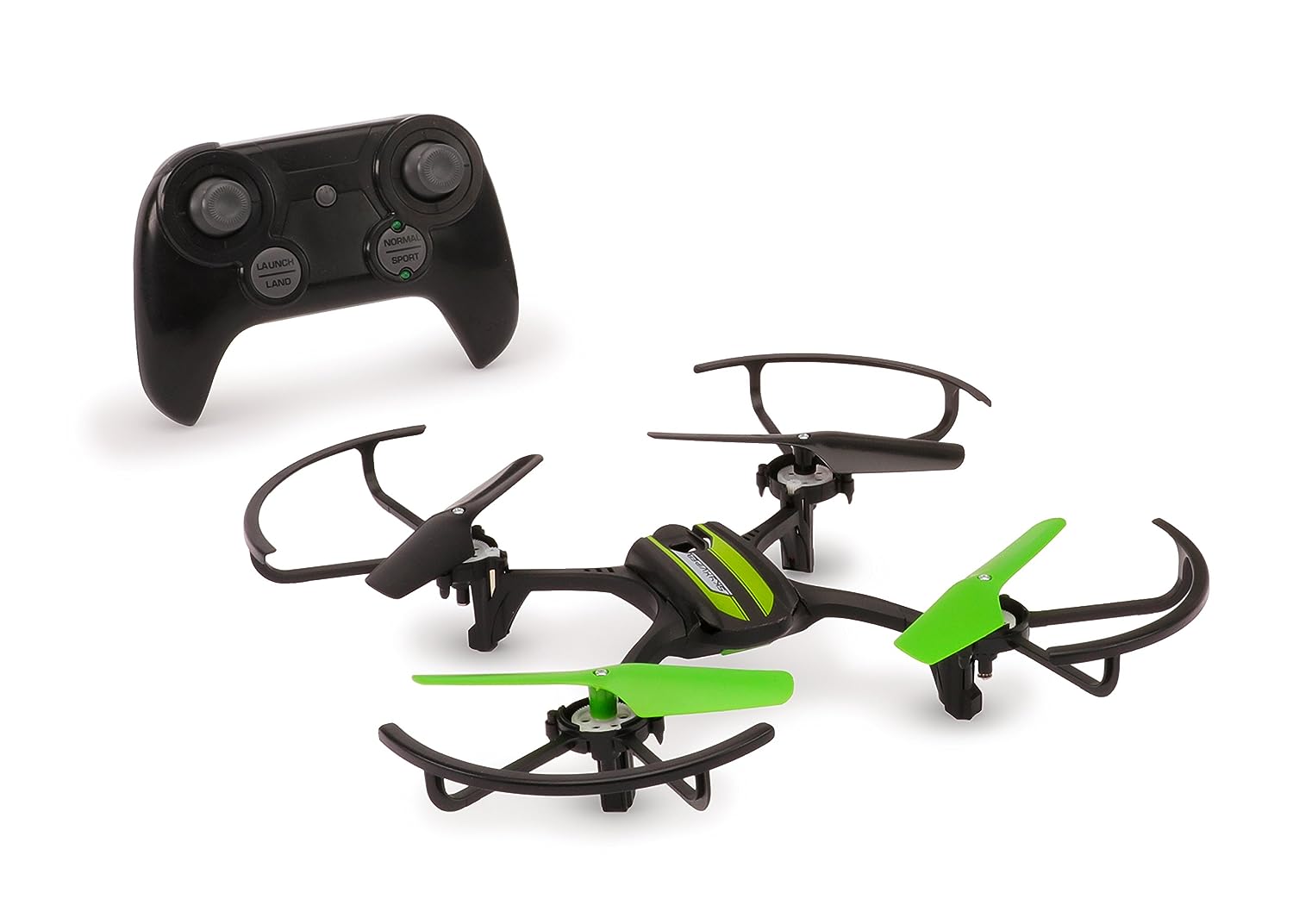 The Sky Viper Fury is another stunt drone capable of performing different aerial acrobatics like 360 flips and barrel rolls. However, at the same time, it also packs some neat, smart flying features.

The drone is capable of hovering, taking off and landing all on its own. It is also able to scan the surface underneath it for added safety.

This drone is perfect for both beginners and advanced users alike. It has different autonomous features that allow beginners to experiment and learn how to fly at their own personal pace.

How to Pick the Best Stunt Drone

Many of the stunt drones will usually not have some of the top-end safety features like multidirectional sensors and autonomous flight and object avoidance.

So it is only natural to look for a drone that offers as much safety and protection features as possible.

Look for a drone that has good propeller blade guards. Stunt drones are used for fun, so they may suffer a lot of bumps, hits, and crashes.

In fact, they are built with the idea that they will inevitably have uncomfortably close encounters with walls, ceilings, trees, and, well, the ground.

So you want the most fragile parts of the drone – the propellers – to be protected. And another thing to look for is drone legs, which can absorb the stress created from falling or rougher landings.

If you are using a drone for flips, barrel rolls, and other stunts, you need one that can get its bearings as quickly as possible.

The majority, if not all, of the stunt drones, are equipped with a 6-axis gyro.

Technically speaking, there are no 6-axis gyroscopes – there are only 3-axis gyros. The reason why they are touted as 6-axis is that they also pack a 3-axis accelerometer. Some drones may even have a compass too.

Although it feels like a cool marketing gimmick, and arguably it is, these features are indeed very useful and allow the drone to be very stable and responsive in the air.

Be careful and mindful of how far away you are flying your drone. Flying it too far away, you are risking losing reception, which can lead to the drone crashing.

Some drones will give you all the freedom you need; however, as good as that may sound, it can also be a bad thing because beginners may have a hard time flying such a drone.

This is why the experience of the user should be considered. For beginners, it is best to go with drones that offer as many smart flight features as possible.

For example, auto take-off, auto landing, and the ability to maintain the same altitude are a few must-haves that will make flying a drone super easy.

Some drones will come with a feature known as Headless Mode.

It is not 100% necessary to have it, but it is essential for beginners who are just getting into flying a prop.

As a matter of fact, this model can be useful even for more advanced users as well as it just makes the whole flying process a breeze.

What About the Camera?

The majority of stunt drones do not have a built-in camera on them. And the ones that do usually have a very basic to mid-range camera.

The reason for that is stunt drones are not designed with the idea of being used for aerial photography or video shooting. So they do not need to excel at that. A stunt drone is designed for performing various tricks and stunts like 360 flips and barrel rolls, allowing you just to enjoy the flying process.

Conversely, some drones may have a camera mounting bracket, which makes it easy to attach a small action camera on them.

The good thing is that because of this stunt drones are significantly cheaper compared to other drones designed for aerial photography.