In this article, we look at the Best RC Tanks That Shoot.

RC Tanks can be a lot of fun but as with any other vehicle, a potential customer must keep a few things in mind. Is the RC Tank for a beginner? Or for a child? Or is the driver experienced with a large budget?

Ready-to-run tanks are generally better suited for beginners. When considering RC tanks for children, you should keep in mind the risk of small parts which could be hazardous. Further, one may also get beginners’ build-your-own kits that are relatively easy to assemble.

The best RC tanks that shoot use advanced technology and materials while also requiring more experienced drivers to control the vehicle and manage the speed. Assembling these tanks can also be more complicated but once done, they are extremely realistic in detail and functioning when compared to an actual tank.

The attention to detail would include camouflage painting to design specifics and even the ability to shoot the main gun!

Manufacturers design and produce scaled versions of real tank models that are able to fire small pellets (also called BB’s) or other projectiles which can be controlled from the transmitter, in addition to maneuvering the tank and allow it go in any direction.

Further, the driver can also rotate the gun in varying degrees and raise or lower the main gun.

Some of the best RC tanks that shoot, although expensive, are specifically designed for battles but there are also ‘toy-like’ micro tanks that are fun to drive around.

Some of the best brands of RC Tanks would include manufacturers like Tamiya, Heng Long, Cheerwing, etc. Before deciding on a radio-controlled tank, we would recommend that the buyer decides on the following features:

Radio-controlled tanks come in different scales varying from the smallest at 1/72 to the largest at ¼. The smaller scales ranging from 1/32 to 1/16 would be a good choice for beginners and these kinds of tanks tend to be easier to control and not as powerful while also being affordable.

Like with other radio-controlled vehicles, RC Tanks may run on fuel, electric, battery or gas.

Battery-powered tanks may have less run time but are also comparatively inexpensive and better suited for beginners while gas or fuel-powered RC Tanks are more suited for experienced drivers and collectors.

The realism with RC Tanks is such that the gun barrel will usually rotate, some even 360 degrees while also moving up and down. The tank will also be able to spin and climb gradients (usually up to 35 degrees).

The best RC Tanks are very realistic in design and made to look exactly like the tank models that existed in the world. This would include attention to detail with extra parts like having accessories or a soldier and hatch etc.

The top RC Tanks and sometimes even some of the affordable versions can fire BB pellets and even have automatic reload and allow the user to pre-load BB pellets or projectiles.

Below is a list of some of the best radio controlled tanks in the market, in no specific order and varying price range, features, etc. The decision would depend on you and what you would want from your purchase.

This model of Heng Long’s RC Tank is a full-scaled version with a simulative motor start-up sound. It has a maximum side turning angle of the turret of approximately 320 degrees from left to right.

The barrel of the main gun also moves up and down at 30 degrees in addition to music and sound to emulate its firing. This Heng Long RC Tank has a maximum climbing gradient of 35 degrees.

With the 2.4 GHz transmitter system, the driver is able to extend the reach, functionality, and handling of the tank and the system would require 6 AA batteries to function.

This tank can move forward at speed in all directions and the user is also able to control the main turret which can shoot BB pellets up to 25 meters! The RC Tank has dimensions of 72 X 22 X 19cm and also has a realistic suspension system and a great chassis! 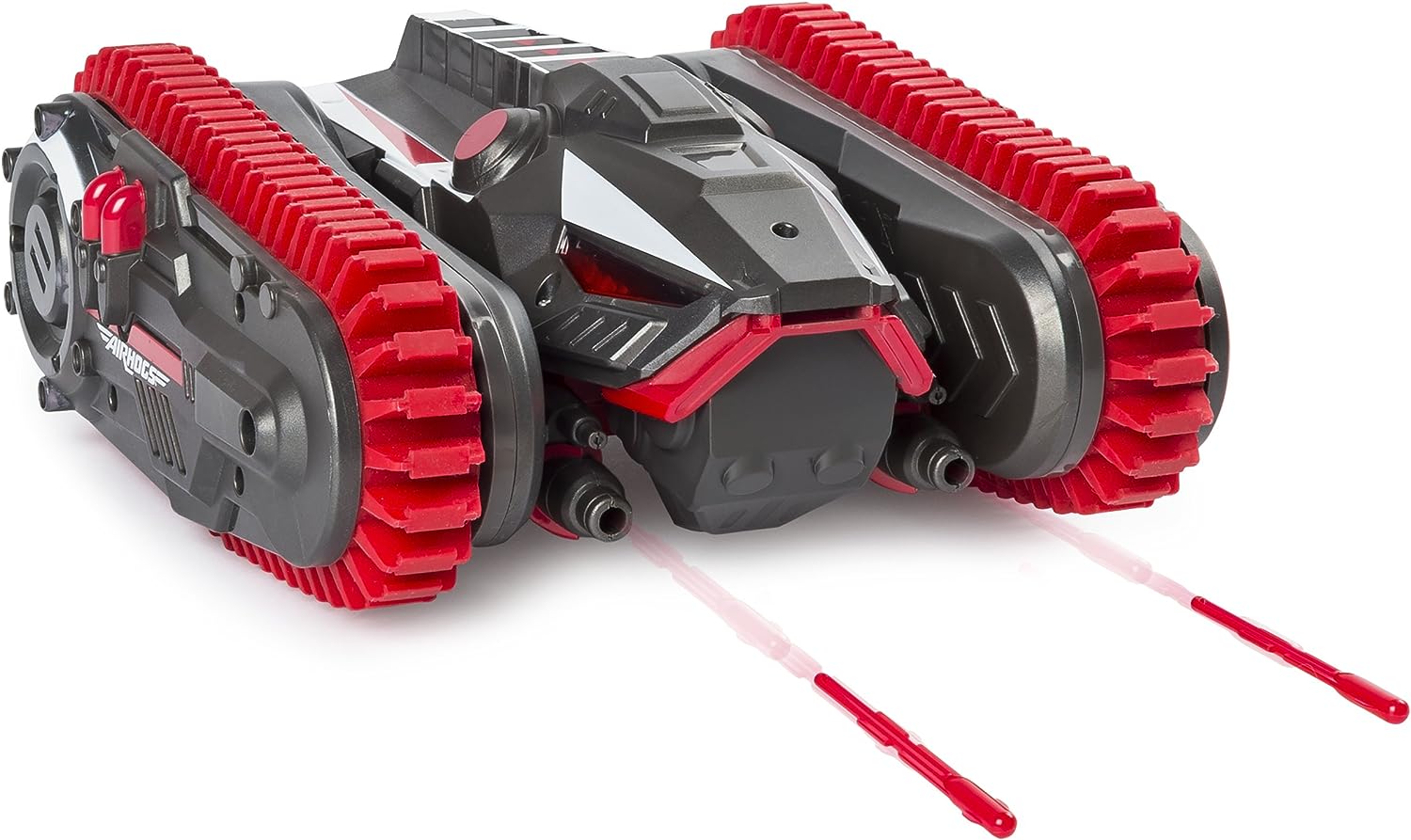 Unlike other models of RC Tanks, this model from Air Hogs has the unique distinction of being able to transform from a tank to a robot at the push of a button and is extremely fun for kids and users!

Once transformed, it has a self-balancing system that allows it to stand upright. As a tank, it is armed with 2 missile bays and the package comes with 6 missiles or projectiles.

The transmitter has a communication range of 100 feet with a frequency range of 2.4 GHz. The tank can be charged via USB and is best suited for kids of 8 years and above.

It requires a Lithium Polymer battery which is not included in the purchase bundle. 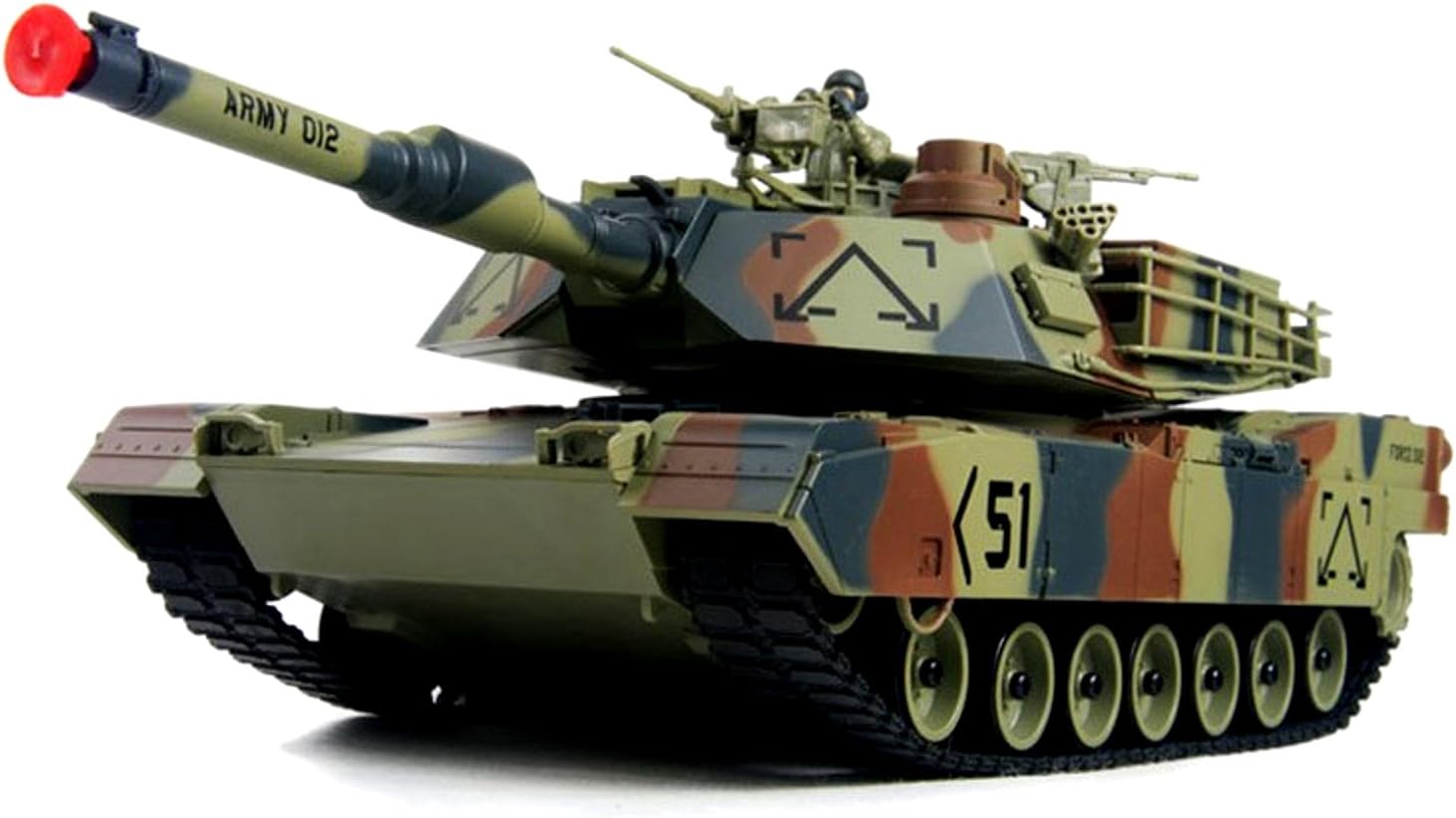 This model from Amazing Tech Depot is really quite amazing thanks to its paint detailing and realistic attention to detail. It weighs about 2.36 kilograms and the package dimensions are about 51.3 x 34 x 15.7 cm.

It requires 4 AA batteries that are not included in the package bundle. The main gun on the tank shoots 6mm BB bullets and the hatch can be loaded with up to 50 bullets for maximum fun!

In addition, the simulation engine and cannon sound along with the recoil action when the cannon is fired make it sound and look very realistic. 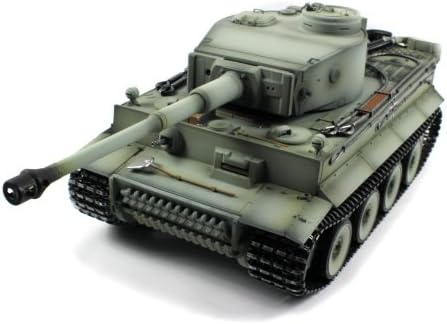 This RC Tank is manufactured by Taigen, makers of high-end replica radio controlled tanks and in this case, modeled after a German tank that was used in World War II, called the Tiger 1 and scaled to 1/16.

This model of RC Tank shoots BB pellets at an impressive range of 25 meters!

The vehicle itself is electric-powered which is rechargeable. The vehicle can move in all directions (forward, backward, turn left and right) and can also perform 360 degrees super spins.

In addition, the detail and realism are great on this tank, so much so that there is a smoke exhaust and also has an authentic engine start up/shut down sound, machine gun & cannon fire sound effects to enhance the realism while driving this tank! The 2.4 GHz radio transmitter allows users to play with two or more tanks without interference.

The remote control requires 6 AA batteries which are not part of the bundle. Do keep in mind, that this model is quite expensive and best suited for experienced drivers or collectors. 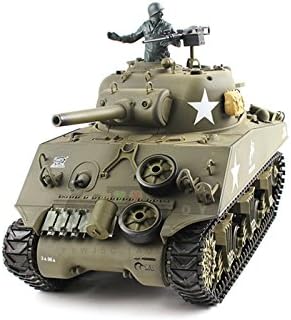 This RC Tank has a little soldier manning the machine gun with true-to-life details and makes this it look as realistic as the real tank going into battle.

Similar to the other tanks on the list, this model also fires BB pellets at a decent distance. This particular version is a 1/16th scale model that can climb up 35-degree slopes.

This has a massive recoil action and comes with decals. Although it has a smoke generator, it has been known to have some issues.

This particular model will appeal to collectors of tanks from World War II, thanks to its detailing and realism. This model has great handling characteristics and includes a wide range of turret adjustability while also being able to cross difficult terrains. This version is a hobby-grade model with a full suspension system and measures over two feet long!

In general, RC Tanks that shoot require less experience and knowledge than other vehicles as they aren’t as fast but it’s important to assess what is most important to you, so as to avoid wasting money.