The functioning of an RC submarine with camera is more complicated since they have to operate underwater, unlike boats. The conductivity of water is higher, one of the most common faults with RC submarines is due to loss of contact with the transmitter and this comes down to the frequency range used.

RC submarines come in various forms and different price ranges starting from cheap toy-like models for children to play with too high-end hobby-grade submarines with in-built cameras for the purpose of taking high-quality photographs and videos.

As with any radio controlled vehicle, the customer would need to decide a budget, specific requirements from the submarine and the purpose that they would be used for. This article will be giving readers a general idea of some of the best radio controlled submarines with cameras.

With the advancements in technological capabilities, RC submarines are becoming more popular. With the help of remote guidance and the ability to transmit live footage, RC submarines are now being used in multiple places and for different purposes, such as from research matters to entertainment.

In these situations, the quality of materials used, design, and quality of in-built cameras, batteries, etc. will decide the cost of the RC submarine.

Please note that the below list is no specific order but rather one that gives the reader information on the best submarines with cameras available in the market today.

The Power Vision PowerRay Underwater with the 4K camera is generally considered amongst the best radio controlled submarines for the purpose of underwater exploration and fishing.

This submarine allows the user to record in 4K UHD video and 1080 pixels. It is capable of reaching depths of 98 inches and has a tethering distance of 210 inches and the package comes with the vehicle, base station, batteries and chargers, wireless radio transmitter, and 64GB memory card.

In addition, Power Vision has ZEISS VR ONE Plus Goggles that can be used with the submarine to get immersive and real-time 3D streaming experience for users, which can be shared with their friends via smartphone.

If all this wasn’t enough, this submarine also comes with 2 hours of battery life!

The downside is that with all this technology and high-end materials used makes the Power Vision PowerRay Underwater a very expensive vehicle and it wouldn’t be affordable for most customers.

This RC submarine comes in bright yellow and has an in-built camera that allows the user to take photos and videos with 640X480 pixels, which can then be downloaded via a USB port. For additional fun and excitement, it also comes with fish feeding equipment, thereby allowing users to take close-up pictures of different marine life.

The LED light attached to the top of the submarine ensures that users are able to get clear photographs even in low-light conditions. To use the submarine, in addition to the purchase bundle, a customer would need to buy AA batteries which would take 60 minutes to charge that can allow the submarine to reach a depth of 1.5 meters. 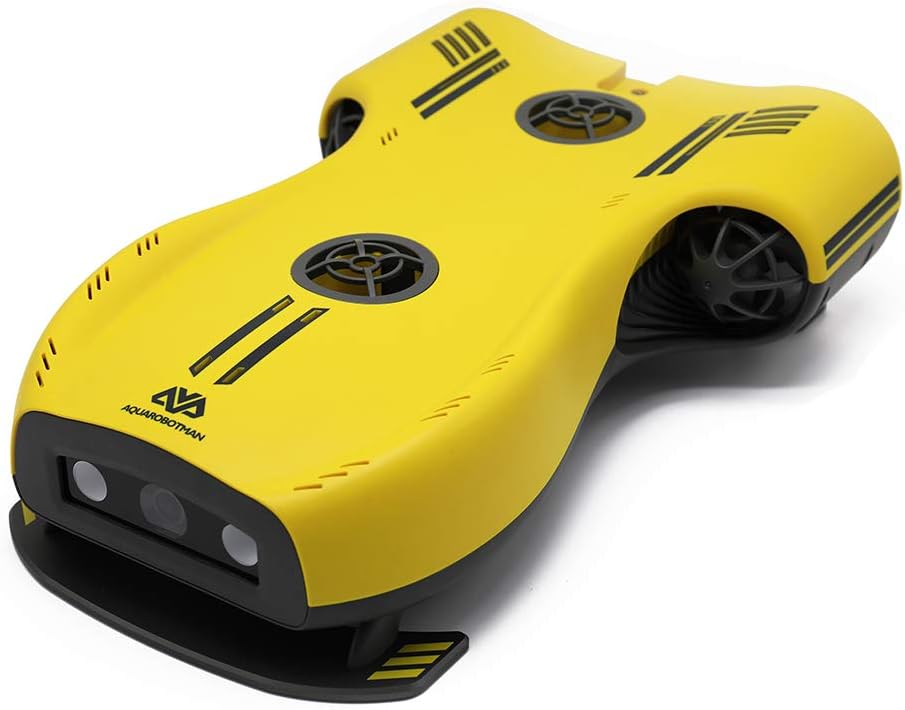 The underwater submarine built by Aquarobotman was primarily built for the purpose of taking advantage of its underwater camera which can be used to take high definition photographs of tank aquariums, fishing (by seeing what fish are underwater before casting a line) and for exploration of small natural water bodies such as ponds or creeks.

The submarine and its camera can be connected to multiple screens and standard audio-visual ports like those found in camcorders, televisions, LCD monitors, etc.

In addition to the 3.6mm wide LED lights which is the primary source of lighting, the camera on this RC submarine is quite sturdy. This RC submarine can be submerged up to 50 meters underwater.

Fathom One RC Submarine with Camera 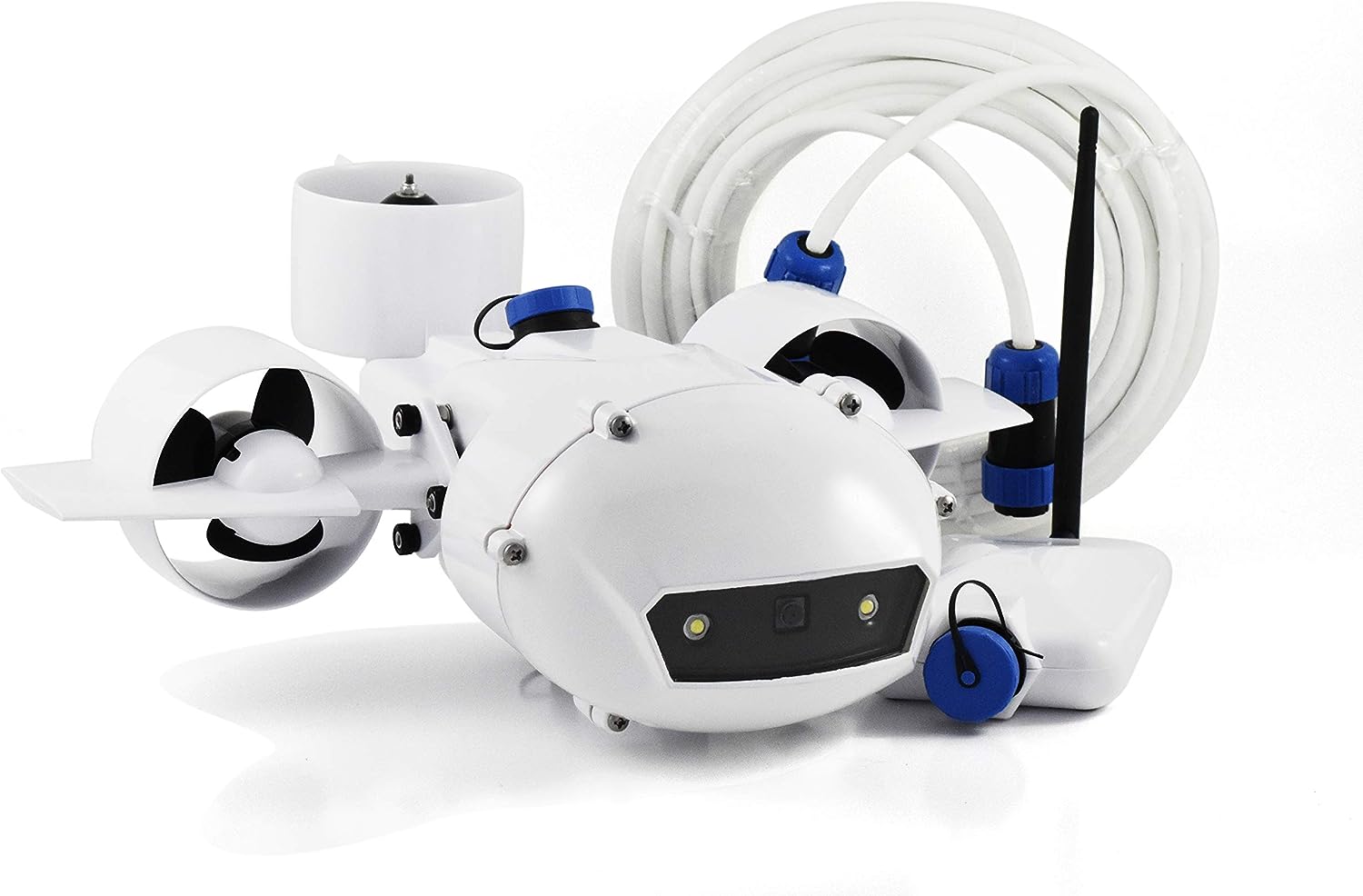 The Fathom One Underwater Drone is a radio-controlled vehicle with a very modern design that can submerge up to 150 feet in depth and has 3-hour battery life.

In addition, there is an in-built 1080p camera which saves all images into the Fathom One’s internal memory.

Further, it also has a unique feature which is an adjustable rail that can be used to attach to surfaces such as a railing in a pool, which would allow for greater camera stability or a user may attach accessories such as a light source or additional cameras. 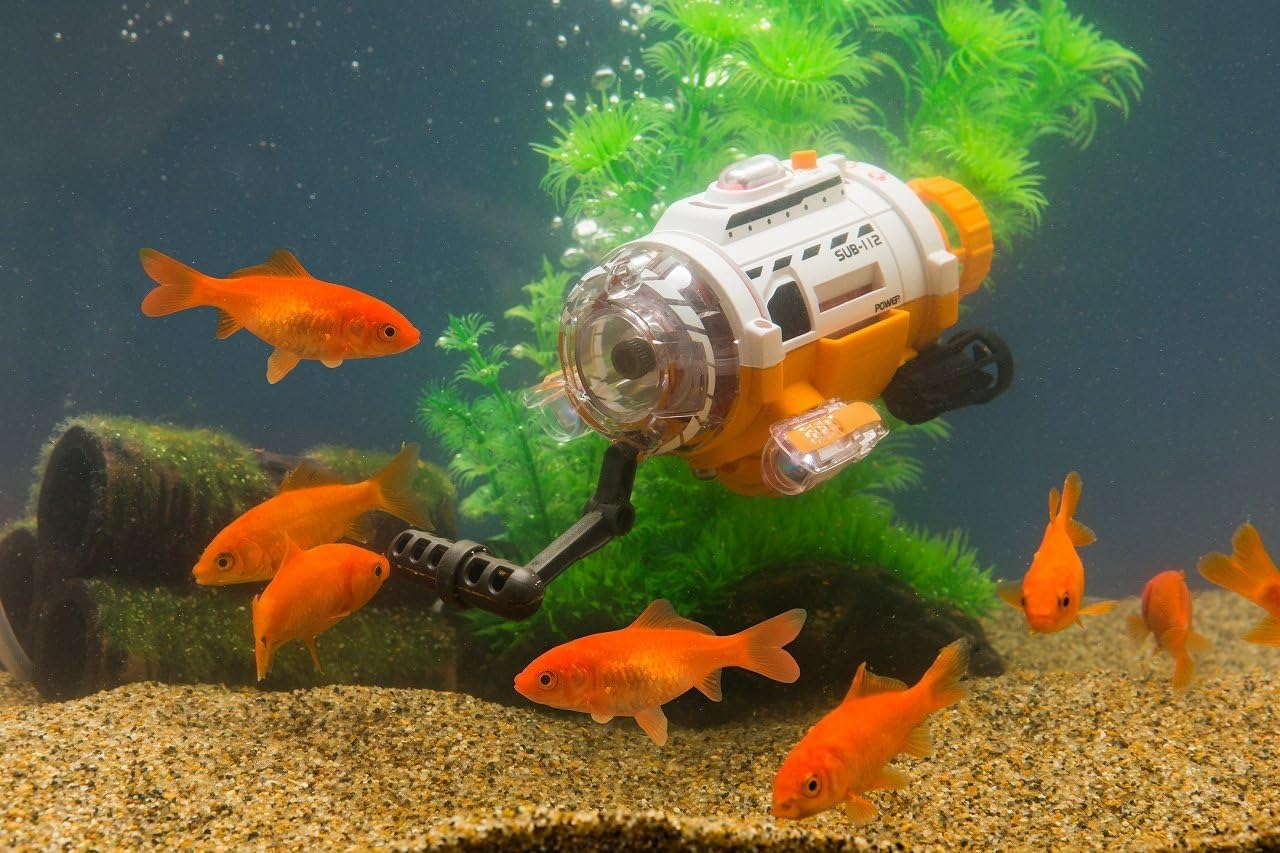 This RC vehicle is unique, in that, it is essentially an underwater camera/submarine.

It has a 30-megapixel camera that is great for taking high-quality photographs and videos of any underwater scenes with the assistance of an overhead lamp that is attached to the vehicle.

The control allows for the user to move the submarine in any direction within a 2-meter distance and the manufacturer also added a unique feature – a claw that can hold bait so that the user can take high-quality pictures of fish that feed on the bait. 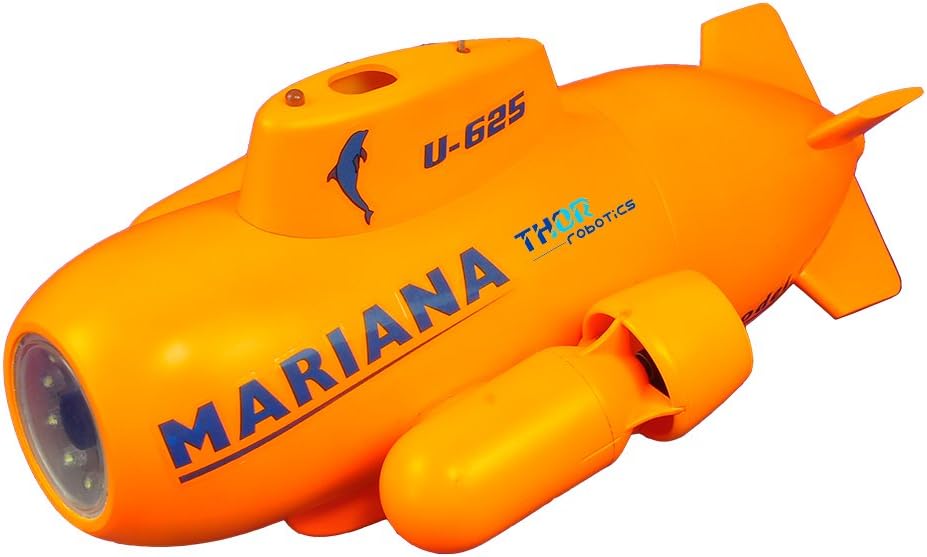 This is a very high technology RC submarine that includes a 5.8G HD transmission camera to allow a user to take high-quality photographs of any underwater scenery and it can also be controlled directly from a smartphone via WiFi.

THOR has manufactured this submarine to submerge up to 3 meters and the vector propellers ensure that the submersion is smooth and trouble-free while also being able to reach speeds of 2.8 km/hour.

This radio-controlled submarine is powered by a Ni-MH safety battery that has a waterproof compartment and is also easy to remove and replace, as required.

This is widely known as the smallest radio-controlled submarine currently available in the market and is best suited for children to play within their bathtubs or in a pool.

It is very safe for children as there are no toxic materials used in the construction of this submarine, while it is waterproof and would, therefore, not leak into the body water and cause a potential hazard.

The Ireav Mini RC Submarine is quite durable and should last for a bit of time. It also houses a 6 channel system that allows the vehicle to move in multiple directions while being able to submerge to a depth of 1 meter.

It has a surprisingly good range of 8 meters within which the signals can be transmitted which allows children to have more fun!

This submarine has a 70mAh battery that is built-in and also requires 4 AA 1.5V batteries to operate which are not included in the purchase bundle (includes charger and antenna).

The submarine is about 13cm in length and is best suited for freshwater bodies such as fish tanks or swimming pools and is only capable of achieving a depth of 1 meter.

In conclusion, enthusiasts of radio-controlled vehicles should be aware that the technology being used to make more capable submarines and in-built cameras are advancing. Currently, the limitations are the depth and range unless a potential customer is willing to spend a lot of money.

Usually, when a person decides to buy a very expensive RC submarine, it would be for purposes beyond just for entertainment such as for professional photography or mapping of marine life. However, there are RC submarines available that are cheap or in the lower price range which are fun and exciting to use!