Flying a drone during strong winds is considered a big mistake. It’s very risky, especially with how delicate and expensive drones are today. Since windy weather is unavoidable in some places around the world, there are drones specifically built to brave those high winds. These wind-resistant drones are sturdy, fast, and built to avoid obstacles.

Here are a few qualities to look for in drones that can brave the windy weather.

What to Look for in Drones That Can Fly in High Winds?

A drone that is wind resistant has to be sturdy and fast. It also has to have a design that is flexible, and not too rigid. It needs to have a large flight range and accurate GPS signal facilities.

These qualities will not only make the drone easy-to-find if it’s lost, but they will prevent it from getting lost in the first place.

Wind resistant drones need to have a precise obstacle avoidance system on board.

With high winds raging up to 30 mph, a drone needs to have omnidirectional obstacle avoidance. It should have multiple sensors on-board so that it can guide itself without much help from the controller.

You worry enough when your drone is flying in windy weather; there should be an accurate system to guide it.

A rule of thumb says that the maximum safe wind-speed for drone flight should be two-thirds that of the drone. Hence, the faster the drone is the better chance it has of flying safely in the wind.

The best drones have speeds ranging up to 45 mph. A drone’s weight and size is also significant here. Two drones with the same maximum speed and vastly different weights will fare differently on windy days.

A drone should also have a foldable design if it is to brave the high winds. When the winds are strong, the drone folds up or shifts the forces of the blow instead of breaking.

A drone should be sturdy enough to handle the force of a blow when it crashes. It’s more likely that your drone will bump into a few obstacles on windy days. It should at least be built strong enough to withstand the force of the blow.

Drones that can fly in high winds should have a long-distance flight range. This feature shows that they can be tracked and controlled even if they are blown off course by a gust of wind.

It also means that their GPS trackers can pinpoint their locations pretty accurately. Since you’re more likely to lose your drone in high winds, it’s best to have greater signal accuracy.

The whole point of flying a drone in the wind is rendered moot if you don’t have usable footage. As your drone rocks back and forth and from side to side, the 3-axis gimbal will keep footage stable.

Three-axis stability is a non-negotiable characteristic of a wind-resistant drone.

With all that out of the way, let’s get to the best drones for windy weather.

The DJI Inspire 2 offers the best wind resistance. It also has the features of a good drone for photography, such as an impressive camera and amazing flight time. It includes a 4K video camera with a 12-megapixel sensor for still images. It also has expandable storage to go with it.

Now let’s get to the wind-resistant characteristics.

The Inspire 2 has a flight speed of 68 kph (42 mph). That means it can brave wind speeds of up to 30 mph. The drone also sports a state of the art obstacle avoidance system which can detect oncoming obstacles 20 meters away. The drone is perfect for beginners who are just beginning to pilot their drones as well as for windy days.

For photography and videography, the drone has a built-in three-axis gimbal that can stabilize the footage. It also has a service called FlightAutonomy that stabilizes the device and processes camera data while shooting. It makes use of the sensors installed within the drone to map out the environment and stabilize the drone as needed.

The drone is quite silent as well so it won’t interfere with the noise already being produced by high winds. That’s a major asset when you have to record precise video or conduct an interview. It’s the kind of thing that was only available to the best filmmakers in the form of noise filters. However, today, you can find this type of technology in commercial electronics

All in all, this drone has nearly all the accessories and features you need to shoot and film in windy weather.

The DJI Phantom 4 Pro is the stuff of legend. Some consider it to be the best drone in the world today and others simply known of its iconic design and marvel at a distance. Hence, it’s no surprise that it’s also impeccable for windy weather. With a name like that, if it wasn’t, it would tarnish the name itself.

The speed of the DJI Phantom 4 Pro goes up to 72 kph (44.7 mph), which means that it can withstand gusts of wind nearly 30 mph strong. The drone’s optical cameras and infrared sensors make it more than equipped for obstacle avoidance.

The drone also incorporates something called Visual Positioning Technology that takes a picture at takeoff. It combines this data with its GPS to find its way back home after the shooting. Hence, you locate the drone right where you started from if you lose control of it.

Like the DJI Inspire, it can also create a virtual map of its environment to track obstacles and swerve away. That’s pretty handy when a random gust of wind can blow you off course for a second. It prevents the drone from bumping in to nearby trees and letterboxes.

Of course, it also carries a beautiful 20-megapixel sensor that can shoot 4K raw video at 60 fps. That’s just the cherry on top though if you’re looking for a wind-resistant drone.

As for negatives, there are very few apart from the price. One is that it doesn’t have a foldable design. However, that’s offset by its sturdy build.

If you need something that can take the gust of the wind, get the Phantom 4 Pro. You won’t regret it.

This drone has a foldable design, a 4K camera, a flight range of 7 km, and a maximum speed of 31 mph. That’s indicative of an impeccably designed drone. That being said, the speed is a bit of a letdown because it can only withstand speeds of up to 20 mph. That’s a step down from the previous two drones on the list.

Still, it has a state of the art omnidirectional obstacle avoidance system with infrared sensors. It has a flight range of 11 miles. The impressive flight range, combined with an accurate GPS tracking system, makes this drone ideal for long flights in windy weather.

The foldable design combined with the sturdy build also helps it withstand any blows it may get from collisions.

It’s only major negative is that it is expensive, but that can be said of the DJI Phantom 4 Pro as well. You get what you pay for after all. 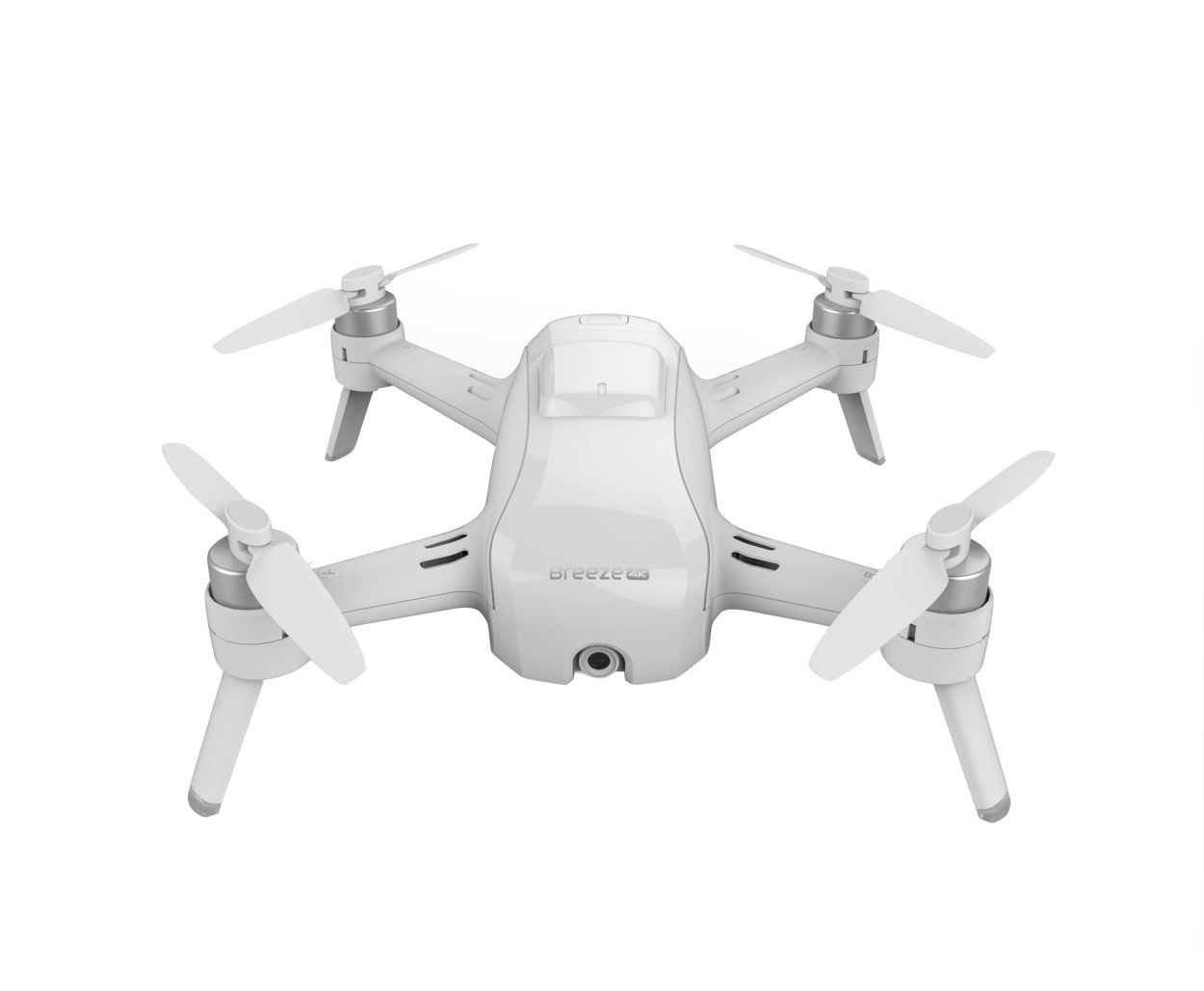 While technically a newborn in the field of wind-resistant drones, the Yuneec Breeze nails nearly every aspect. It has a flight time of 30 minutes, a very capable CMOS sensor, a three-axis gimbal, and 4K video recording.

Like the Mavic 2 Pro before it, the Yuneez Breeze can withstand gusts of up to 31 mph in speed. Intelligent flight modes also help it maneuver and avoid obstacles up to 10 meters away. It is the result of the intelligent Intel RealSense technology incorporated into the Yuneec Breeze.

There aren’t any real negatives with this one besides the lack of speed. It has a sturdy build, an affordable price, and a great aesthetic. It doesn’t have a foldable design though, which can attract the ire of some enthusiasts.

When Is It too Windy to Fly a Drone?

It’s not advisable to fly drones in windy weather.

If you must, the limits vary between speeds of 10 and 30 mph. Most commercial drones can fly between wind speeds of those magnitudes.

A simple rule of thumb to follow is the wind speed should never exceed two-thirds of the drone’s speed. Since most drones have a top speed of 45 mph, wind speeds of over 30 mph aren’t advisable for flying.

Flying drones in windy weather can be hazardous to people around you and yourself. It also does no favors to the drone since it’s more liable to crash and bump into obstacles. It can also harm birds and other animals.

If you must fly your drone during windy conditions, you should be vigilant and never let it out of your sight. You should also avoid areas with a lot of obstacles and birds.

Needless to say, you should also make sure you’re shielding the drone from oncoming gusts during takeoff. This will help the drone lift off without crashing into someone else.

Can You Fly a Drone Near a Windmill?

First, the windmill poses a threat to the drone as an obstacle that it may crash into. In that scenario, your drone is the least likely to survive. Another complaint that people have had about flying drones near windmills is signal interference.

The windmill interferes with your control of the drone, and the GPS signal. Hence, you can crash, or lose your drone near a windmill. You may even be unlucky enough to lose it and not regain the GPS signal.

Can Drones Fly During a Bad Weather?

You shouldn’t even try to fly a drone when hail is raining down upon you. Your drone will be damaged during the event and you probably will have to get a new one. That leaves rain and snow.

Water from fog and rain can cause water damage and short circuits within the drone. Even landing in wet grass has been known to damage a drone.

That kind of internal damage is not always repairable. After that, you’d be better off getting a new drone than paying for any repair work.

Hence, never fly your drone when it’s raining. Even if there’s a lot of humidity in the air like during fog, don’t risk it. Not only will it be harder to avoid obstacles during the fog, but damage to the internal electronics is quite possible.

There are generally no problems with flying a drone in the snow. You should make sure the drone is free of snow before flying since the snow can melt into water. Otherwise, you should be good to go.

Do note that there is an optimal operating temperature for most drones. Many have an operating range from 32 F to 104 F. Flying above or below that can damage internal electronics.

Flying below 32 F, the freezing point of water can freeze the moisture surrounding the circuit boards. Moisture can lead to water damage that not only voids your warranty but also results in permanent damage.

Again, melting the snow and drying the drone off here won’t do much good after the damage has been done.

If you must fly in the worst weather possible, these drones will help you shoot your masterpiece on the windiest of days. Take advantage of their stabilization technology and obstacle avoidance to shoot even during high winds.

Best Drone for Vlogging in 2022