People have been trying to capture their lives on video for as long as we can remember.

And there is nothing more impressive than capturing these rare moments of skiing steep slopes, rafting down some rough waters, or mountain biking on off-road trails. People have been doing that for years using different action cameras. But the footage may not always be useful as it can be very shaky and jittery.

This is where drones can offer a helping hand. Not by just capturing these stunning moments on video but by also providing unique cinematic views, angles, effects, and superbly smooth and shake-free footage.

Here are the best drones for extreme sports at a glance:

The DJI Mavic 2 Zoom has so much to offer to any extreme sports enthusiast that it easily is one of the best drones in this category.

First, let’s start with the quality of the camera. The camera can give you everything you want and then some; it is capable of shooting 4K videos at 100 Mbps and 30 fps while also giving you enough creative freedom so you can create stunning and cinematic videos.

The neat features like the slow-motion, Hyperlapse, 2x optical zoom, dolly zoom, HDR photos, the 48 MP super-resolution, and so much more, are making this drone best for people that want to capture breathtaking videos and images.

It packs some of the most advanced software and hardware in order to produce an outstanding and seamless experience.

If you want to have the drone follow you, you can easily do it with the ActiveTrack 2.0. The drone can automatically plan its path while avoiding obstacles, predict your movements, and more.

The Mavic 2 Zoom has an improved focus accuracy, and the focus speed has been increased significantly compared to other comparable models.

This drone has one of the best obstacle sensing capabilities as there are sensors on all its sides. It even packs the APAS flight system, which will automatically have the drone avoid any obstacles as you fly it forward or backward. It really doesn’t get any easier than that.

And last but not least, even in the event of losing sight or signal with your drone, it will automatically return to the lift-off area thanks to its return to home function. 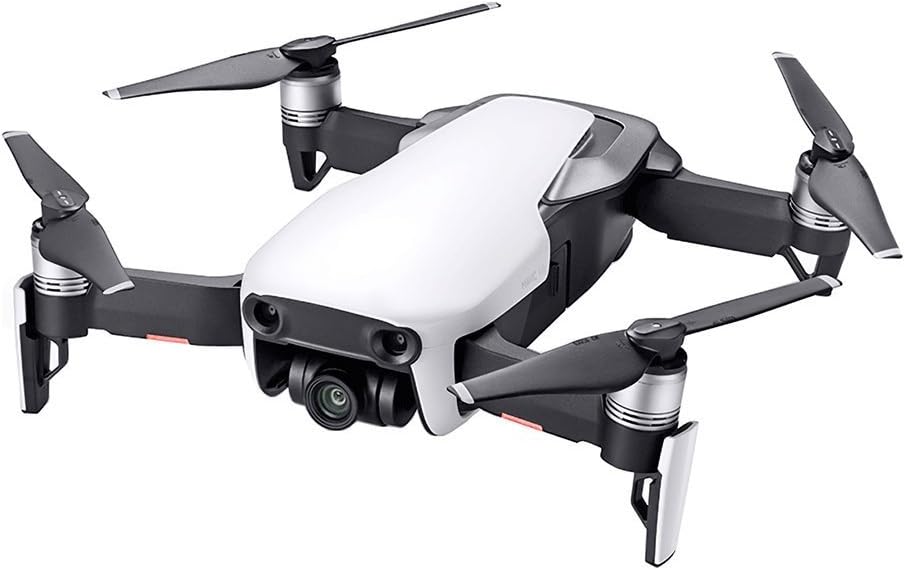 If you have seen some of the ads, you will know that DJI designed this drone specifically for adventures. Whether you are cycling, running, rafting, or doing other activities, the DJI Mavic Air will have you covered.

The camera is capable of capturing 4K at 100 Mbps videos and stunning high-res HDR photos while offering some cool features like sphere panoramas, quick shots, slow-motion videos, and so much more.

You can be sure that the videos will be as smooth as possible, thanks to the 3-axis gimbal.

The flight time you can expect from this drone is about 21 minutes; however, keep in mind that it can vary dramatically depending on the weather and wind conditions.

The ActiveTrack feature will have the drone follow you no matter where you go this in combination with the improved flight safety and obstacle detection capabilities it has makes this drone a trusty companion.

And lastly, both the drone and the controller are foldable and easy to take anywhere. The low weight also makes it very convenient and will in no way encumber you.

The DJI Mavic 2 Pro is another outstanding drone capable of capturing stunning 4K HDR videos at 100 Mbps while packing some pretty cool features.

The Mavic 2 Pro definitely gives the Mavic 2 Zoom a run for its money. The 20 MP camera of the Pro model has a larger sensor and better lenses which deliver higher quality images with very low noise and accurate color representation even in very low light conditions.

The drone is capable of targeting one person and following them while avoiding objects and obstacles. The Mavic 2 Pro is able to scan its surroundings in multiple directions.

If you are looking for a drone that will deliver the best quality photos and videos possible with crisp and true-to-life colors, then the Mavic 2 Pro is the way to go. 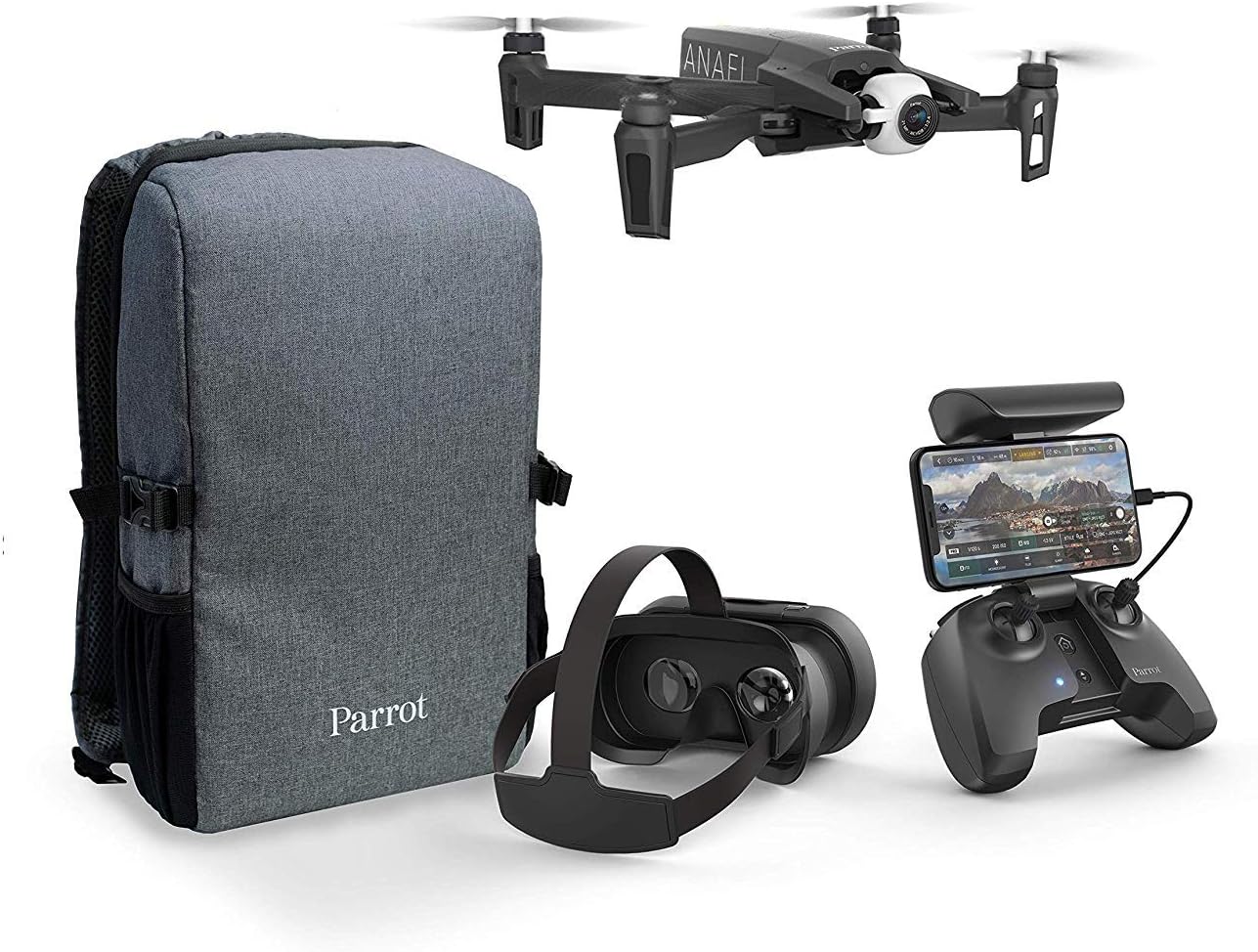 The Parrot Anafi packs a high-quality 21 MP 4K camera capable of capturing HDR footage. The camera is also capable of creating a dolly zoom (thanks to the 3x zoom), hyper-lapse, and slow-motion videos.

The camera is mounted on a 3-axis gimbal capable of 180-degree turning. The gimbal will not only keep your videos stable and smooth but can also give you the ability to shoot from new and unique angles.

The FPV goggles will put you right into the action thanks to the high-quality 1080p Full-HD video transmission.

Overall this is one extremely small and lightweight drone, which is very convenient to bring almost anywhere.

The drone also lacks object sensing and avoiding capabilities, which means that it is best used in open areas.

However, it packs some neat and smart flight features like automated return to home, adjustable geofence, and you can even make it produce a loud beeping sound if you happen to lose it.

The Phantom 4 Pro v2.0 is capable of capturing one of the best and professional-looking high-quality videos and images. Its camera is capable of shooting 4K at 60 fps and 100 Mbps while keeping the videos and photos as smooth as possible thanks to the 3-axis gimbal.

This drone is fast and reliable.

This bundle from DJI includes everything you need to start using your drone immediately, including extra batteries, a memory card, extra propellers, and more.

What to Look for in a Drone for Extreme Sports?

If you will be getting a drone that can be used for capturing fast-paced and moving footage, one of the most important aspects will be its camera.

No matter what kind of extreme sports you are into, you want the footage to be crisp and with a good level of detail. I recommend going for the best camera within your budget – ideally, a 4K capable of recording at 100 Mbps, 60 or 30 FPS is going to provide the quality you want.

Additional features and extras like being able to capture slow-motion videos, hyper lapses, time-lapses, dolly zoom effects, and all that good stuff are more than welcome as they can bring your video to a whole new level. 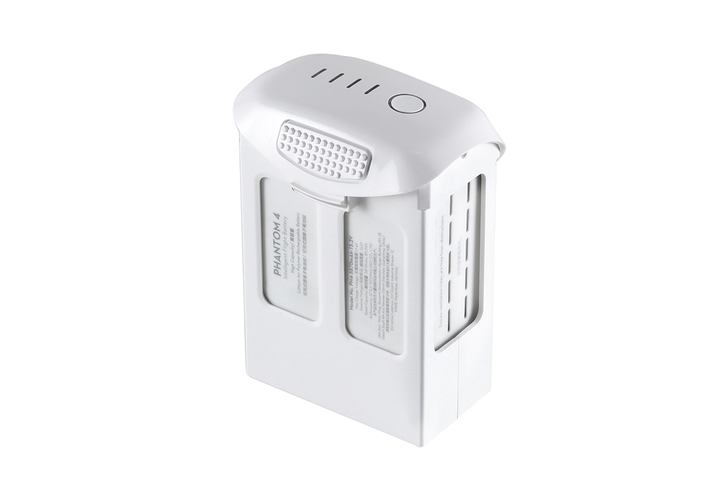 While cycling down an off-road trail or rafting down a river, the last thing you want to worry about is your drone running out of battery juice. If that happens, it can fall and get damaged or even lost.

You can expect about 20 to 30 minutes of flight time from the majority of the high-quality drones on the market today. Going for a drone with less flight time is not recommended.

A word of caution, though, the flight time on each drone is usually not an average but rather represents the maximum time it can fly, which usually has been measured in ideal conditions. If there is a strong headwind, for example, this time can go down significantly, so you need to exercise extra caution and be careful about that – especially considering how fast time goes by when you are consumed in a fun activity. 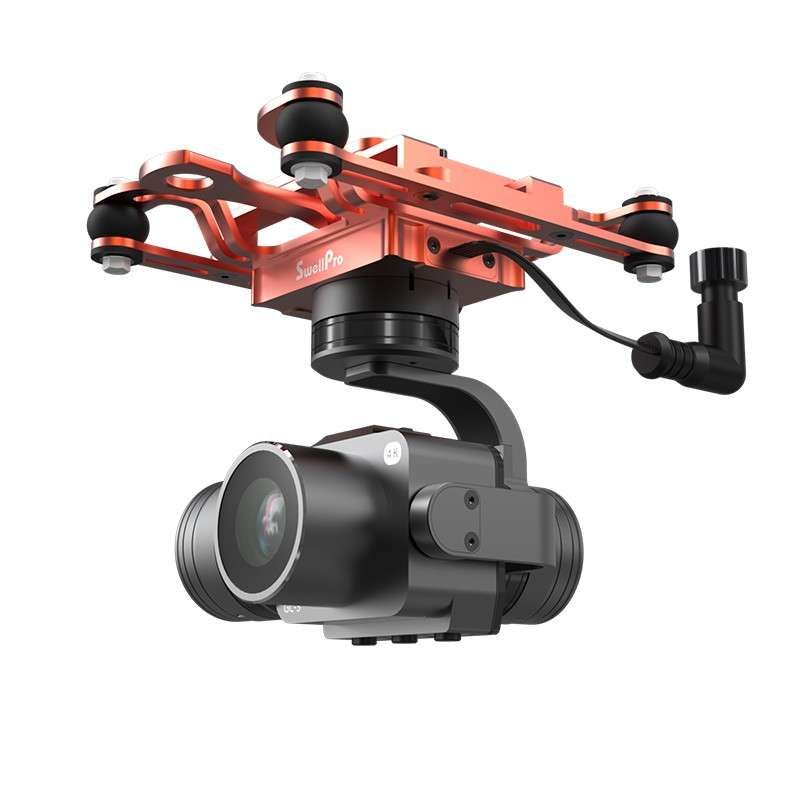 You want your video footage to be not just high-quality and detailed but also stable and smooth.

If you have ever strapped one of the older GoPro’s on your helmet while mountain biking, you will know what I mean – ending up with shaky footage is very disappointing.

This is where using a 3-axis gimbal comes into play. A 3-axis gimbal means that it provides support in all three planes of motion (the yaw, row, and pitch) and provides the best level of camera stabilization.

Generally speaking, the longer the transmission distance, the better. Especially if you will be recording other people. Most of the high-end drones can be controlled up to several miles away from you, but you need to be careful not to lose your drone or crash it.

It is important to note that the maximum transmission distance noted on the drones is going to vary. The maximum range is usually measured in unobstructed areas where there is no interference whatsoever.

Since you will most like be taking your drone to different areas and places where multiple obstacles may be present, you need a drone that is capable of being as autonomous as possible.

Look for how many sensors it has – the more, the better; is it capable of avoiding obstacles on its own; can it create detailed 3D maps of its surroundings; does it have GPS; and can it return back to you if you lost signal with it.

Not all drones are built the same. And one very small detail that may often be overlooked is their wind resistance.

Take a moment to consider where you will be taking and using your drone. Is the area windy? If so, how strong are the winds you are expecting to encounter?

Strong winds will affect the stability, performance, and flight time of the drone. They can even knock the drone from the sky.

The First Person View (or FPV) is a cool feature that allows you to experience what it would be like if you were in the drone and actually flying it.

With all the virtual reality craze over the past years, it is no wonder it reached the drone industry as well.

FPV capabilities are a must-have for anyone who wants to really experience that immersive feeling of flying a drone.

Keep in mind that an FPV ready drone may require you to buy goggles and extra accessories.

Even if you are not going to be using the FPV immediately, having the extra option is always a good thing, rather than having to buy a new drone later on.

With drones that will be used for shooting extreme sports videos, there is one additional feature that I feel like it is a must-have – the tracking feature.

Some of the high-end drones are able to lock on a target and follow it. For example, the Mavic 2 Zoom is even capable of predicting your path even if you get obscured by a rock or a tree.

Usually, the drone is able to maintain its flight height and trajectory while simultaneously scanning the surrounding areas for possible obstacles and avoiding them.

Consider how fast your drone needs to be to keep up with what you will be doing. Some extreme sports will involve faster movements at long distances, so you need a drone that can move just as fast, if not faster, as you are.

Ability to Fly It Without the Controller

Certain drones can be flown with a smart device rather than their controller.

The ability to fly your drone without the remote is important for several reasons; controllers are usually big and clunky. If you are cycling, you may be able to attach the controller on to the bike’s frame, but if you are rafting, snowboarding or skiing, you may not be able to bring the controller with you. So what alternatives are there?

Luckily some drones can be controlled with a smartphone. And a smartphone is a lot easier to bring with you. However, the only downside is that the transmission range will be severely impacted.

Controlling your drone with a smartphone cuts the distance down to no more than 100 meters and the height to about 50 or so meters.