Drones are becoming more and more common for photography all around the world. Most people found it next to impossible to take aerial shots before. However, these days, there are thousands of drones out there for wildlife photography.

In this article, we’ll be discussing the best drones for wildlife photography.

These drones will have to have specific characteristics to fit into this bracket.

They don’t just have to be stable and precise, but they also need to be silent.  They need to be very sturdy and have strong signal strength.

Wildlife photography entails maneuvering through trees and bushes and a lot of foliage. It also entails being silent so as not to scare off the wildlife.

Hence, drones with high signal strength, long flight time, and foolproof security features will be required. These help in maneuvering the drone, as well as tracking it if it gets lost.

The drones that have all those characteristics will hopefully get you the best wildlife photos to hope for. Of course, none of them are devoid of a learning curve. If you want to operate a drone, you’ll have to learn a thing or two.

This is probably the best drone on this list for this category, which explains why it’s so expensive. There are no major flaws with the Mavic 2 Pro.

It lasts for 31 minutes in the air, which is a lifetime for drones. It has a flight range of about 4.9 miles, so you could be standing far away from where the action is and still film amazing shots. Speaking of which, it also comes with a stunning Hasselblad 1” CMOS camera, which means you’ll be capturing crisp footage.

The DJ Mavic 2 Pro also has a GPS installed so that you can track it if you lose it over a distance. This means that you won’t have to panic if you crash it or if a bird flies into it. This is going to be very likely if you’re flying it over unfamiliar terrain.  You can crash it into a tall tree branch or a flock of birds, or even a bat if you’re filming at night.

Make sure the GPS tracking is switched on all the time. You never know when you’ll need to check where your drone has gone.

A lot of photographers consider this to be the best drone for wildlife photography since it has such a wide range, it can help you get shots of animals and wildlife that are far away.

The 20-MP camera will also help you get shots that are impossible to get otherwise.

This way, you may be able to pull off a Sir David Attenborough.

Don’t get cocky, though! You’ll require a lot more practice before you become a pro. 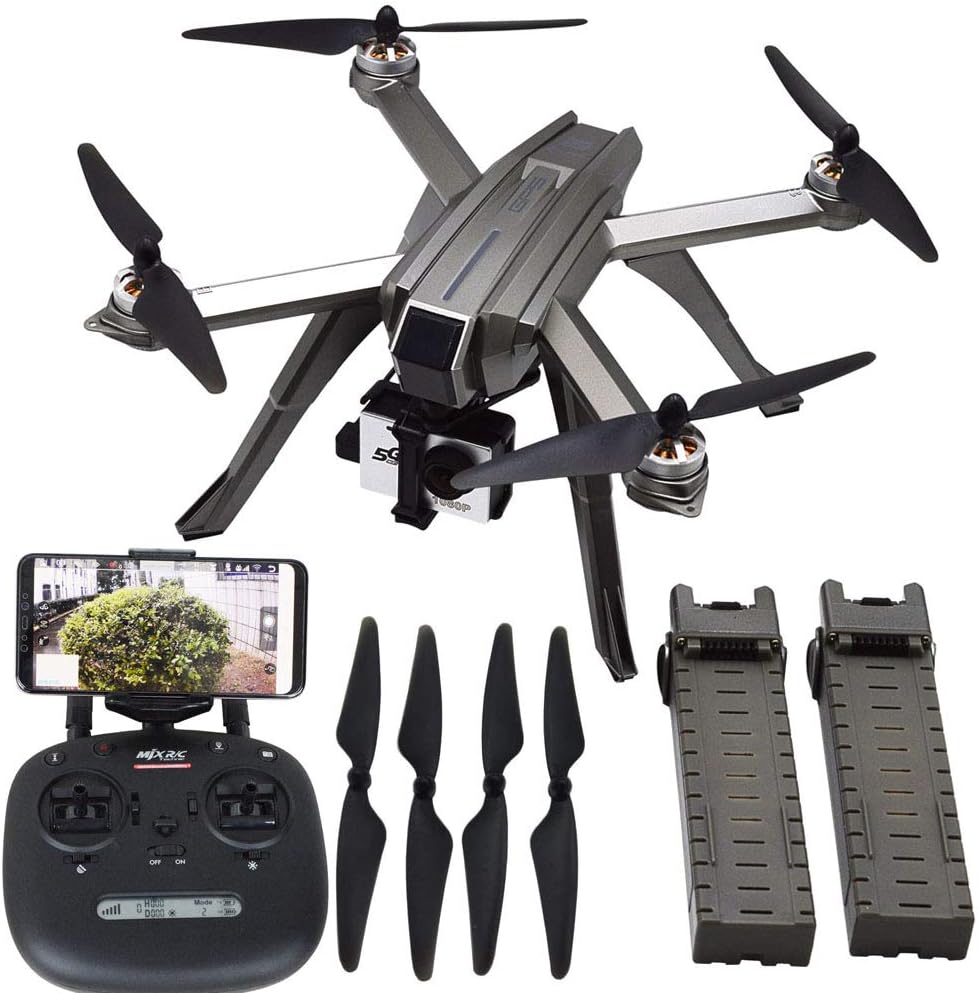 If you’re looking for the best value for money, then the MJX Bugs 3 Pro is the right option.

You can choose which camera goes with it as well.

It has great security features, including a GPS tracker. It even has smart flight modes and a pretty decent flight time of 22 minutes.

This is a much shorter flight time than the Mavic 2 Pro, but it’s still pretty decent for wildlife photography.

The GPS tracker not only includes a compass, but it also has an alt meter. This means that you’ll know exactly how tall of a tree you’ve crashed your drone into.

The negatives with the MJX Bugs 3 Pro are very much present, but they’re not overwhelming. They had
to make some sacrifices for the lower price, didn’t they?

The first negative is the lack of a foldable design. While this may bother some people, others with big bags or carrying vehicles won’t care. If you’re a small crew that wants to be able to pack everything up, you’re in for a disappointment.

One genuine issue that you can have with this model is a lack of stabilization. You can get an additional stabilizer for this, but remember that you get what you pay for. The lack of built-in stabilization means that footage will shake when you take the drone to higher altitudes.

The negatives aside, this is a drone that amateurs will love. It’s good for polishing your drone flying skills

The one thing that’ll get you excited about the DJI Inspire 2 is that it’s brimming with accessories. It has the standard GPS, a sleek design, and some smart flight modes.  It also packs a decent security system and very powerful engines.

The Inspire 2 records pure RAW, content to the SSD drive. Once you have this footage, you can easily edit it using Photoshop. There are three cameras that you can choose from and there is a 360-degree rotation mechanism built into the drone.

The flight range and the timing of the drone are both excellent. Though, of course, they both fall short of the mighty Mavic 2 Pro. The flight time is 27 minutes and the flight range is 4.3 miles.

The one negative that the DJI Inspire 2 has is that it’s heavy, and the reason is too much equipment. You can shoot professional, theater-worthy footage with it, but you will have to bear the expense and the weight for that privilege.

The Inspire 2 may be apt for taking wide shots of scenery and wildlife. However, I wouldn’t recommend it for close-up photography. You won’t be able to get the shots you need. The drone will probably attract the attention of the animals because of its weight and size.

You will also stand the chance of attracting their attention with the noise that this drone makes.

Luckily, with the resolution you’ll be shooting at, zooming without losing quality isn’t a problem.

One of the best applications of the Inspire 2 is to film galloping hordes of wildlife, like in Planet Earth. You may also need professional equipment to carry this around. This isn’t recommended for anyone that doesn’t have professional experience or equipment. If you’re a pro, then this is the right choice for you. Those of you even a little familiar with drones knew this was going to be on the list.

The Phantom drones have made a name for themselves as being stealthy, fast, and the perfect choice. They often end up in the hands of vloggers and YouTubers. They also are the favorites of filmmakers and hikers.

The best part of the Phantom 4 Pro is its perfect camera. It has a 1” CMOS camera that shoots footage in RAW. It even has a 10” tablet holder and smart flight modes.

The flight-time is comparable to the Mavic 2 Pro (30 minutes) and the flight-range to the Inspire 2 (4.3 miles). That combined with the protective bag (included) and the incredible security system onboard makes this a treat.

The security system offers collision sensors and signal loss control. It even helps with battery discharge. Hence, you can help the battery last longer by decreasing usage.

The negatives with this one are small. It is pretty large, which means that you won’t want to go hiking alone with it.

You can take along a couple of mates to shoot the wildlife. Just make sure you’ve fastened it and kept it safe. Since it doesn’t have a foldable design, it is hard to keep safe on long treks without vehicles too.

Finally, the only real downside to this is the price. Like most of the Phantom drones, this one doesn’t come cheap. Whether it’s because of their beautiful design or the lore that surrounded them after their popularity, phantoms are always expensive. This is a drone with all the right stuff.

It has a camera that shoots in full HD. It has a 14-megapixel sensor on board for the best shots.

It even has a range of sensors including a GPS GLONASS which optical position tracking. This is best for shooting indoors, as well as outdoors.

Its range of 1.2 miles isn’t ideal, but it’s not terrible either.

The time of flight is just phenomenal. It is 30 minutes, which is comparable to the best flight times for aerial drones out there. If you add a second battery, which is optional, you can even achieve a flight time of 1 hour. That is nothing short of phenomenal.

The two cons with this are that it only records in full HD and the non-foldable design. This makes it hard to carry, and the full HD recording also doesn’t do favors to far away shots.

If you invest in a better camera attachment, this may be worth the price. 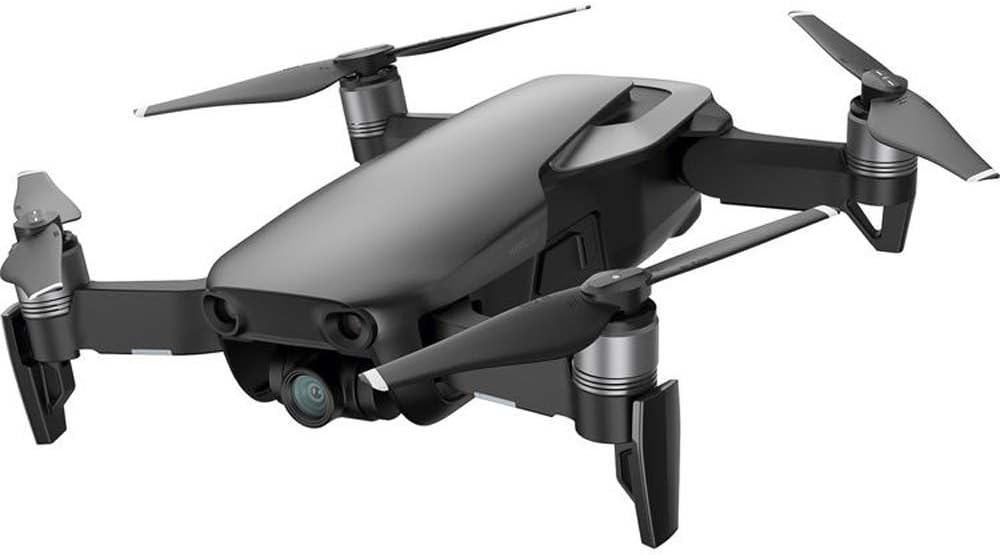 The DJI Mavic Air improves on a lot of drones on this list by having a foldable design.

The flight duration and flight time aren’t bad either. Its battery can work up to 21 minutes and it can operate at a range of 4 km.

The Mavic Air shoots in RAW or JPEG and has a camera resolution of 12 MP. It can record a panoramic shot at 33 MP.

It has reliable security system onboard that has a decent battery life, collision sensors, and signal loss control. There is also a smart flight mode and a GPS installed.

The foldable design is also a significant improvement over the others on this list. This makes it much easier to carry in the event of a long hike.

If that wasn’t enough, the Mavic Air comes cheap. It costs way less than the phantom or the DJI Mavic 2 Pro.

The only negative that you can point out is the camera doesn’t have a mechanical shutter. That way, if the screen is damaged or smudged, it can’t be protected from further damage.

Hence, if you’re looking to go out for wildlife photography, just remember to take a case for the camera.

Otherwise, the drone is lightweight, incredibly precise, and has accurate controls.

What is Drone Photography?

Drone photography refers to the capturing of images or videos through the use of an unmanned aerial vehicle (drone). This drone usually carries a video camera or a still-image camera and provides an aerial view.

Aerial photography through drones has become more and more prevalent as of late. YouTubers, video bloggers, and filmmakers have all used them in their work. The freedom and access that modern drones have given humans have led to a whole subgenre of photography and vlogging.

Drones today can cost anywhere from over a hundred dollars to over $60,000. These range from lightweight drones to heavyweight drones that are used for intense conditions.

Some drones are even used for surveillance and tracking. Some are used for scouting locations and architecture as well. Others are simply used to make videos and film projects.

Can I Fly My Drone Over a National Wildlife Refuge?

There is a specific law regarding national wildlife refuges. They’re specially made for animals to feel secure and live out their lives with as little human interference as possible. Hence, recreationally flying drones over the refuges is only permitted under “appropriate incidental or secondary use.”

Hence, flying drones over these areas is allowed, but under stringent circumstances and situations.

This list of drones will specifically help you shoot wildlife.

They have the largest ranges and the greatest flight times. They’re also very quiet and have high-quality camera sensors.