Many DJI drone owners may feel very hesitant to fly their drones when it looks like it will be raining. And this is absolutely normal.

Nobody wants to have their drone damaged by the rain, right? But can it be done?

Are DJI drones waterproof? DJI drones are not waterproof. Water and moisture can damage the electronic parts, batteries, and motors of the drone. DJI drones should not be used in adverse weather conditions such as rain, snow, or fog. With that being said, some commercial DJI drones are water-resistant.

It seems, however, that there are some caveats. Although drones and water don’t seem to mix well together, there are a few things we need to know first, so let us take a look.

Are There Any DJI Drones That Are Waterproof?

To better answer this question, we need to take a look at the whole drone product mix from DJI.

There is no official data that suggests these DJI drones are waterproof or water-resistant, for that matter.

These drones have a lot of orifices that are not protected in any way, shape, or form. What this means is that water can easily enter the body of the drone.

And we all know that electronics and water do not mix well together.

In fact, DJI does not even recommend landing your drone in puddles of water.

Conversely, certain DJI drones have a design that may allow them to tolerate a little more water splashes like the DJI Mavic. The DJI Phantom models, on the other hand, have a lot of vents all over their bodies.

However, we also have a few more commercially oriented drones like the:

The Matrice 200 product line is built to endure harsh weather conditions, including rain. These DJI drones are water-resistant, rated IP43.

The Agras series is also considered to be water-resistant.

What Is the Difference Between a Waterproof and a Water Resistant Drone?

Water is one of the most common problems that many drone owners may have to deal with.

So it only makes sense to do our due diligence when buying such an expensive product. This is why understanding what is the difference between something being waterproof and water-resistant is important.

Waterproof means that something is impermeable; in order words, water does not go through it. So a waterproof drone, in theory, can be submerged in the ocean, and it should work fine even if we leave it underwater for several hours.

Water-resistant drones are not waterproof. If something is water-resistant, it simply means that it can resist – read overcome or deflect – a certain amount of water. Subject it at some stronger water sprays or underwater for long enough, and it will fail.

One of the biggest problems is that companies frequently use these terminologies very loosely and interchangeably.

However, waterproof can mean different things.

For example, earlier, I said that the DJI Matrice is rated IP43. This is the enclosure rating of the drone, and the different numbers mean different things.

In this case, the number 4 simply means that the drone is protected against solid objects that are 1mm or larger (but it is not dustproof).

The number 3 means that the drone is protected against direct water sprays that are up to 600 from the vertical (but not against water immersion or water sprays from all sides).

How Does Water Affect DJI Drones?

The water droplets during rainfall come in varying sizes, usually between 0.1 to no more than 5 mm. Normally 4 mm or larger raindrops split into smaller droplets.

The water droplets can get in contact with the batteries, electrical circuit boards, and the electric motors that operate the DJI drones.

It does not happen immediately, but water can cause corrosion, rusting, and shorting, which causes the electrical components in the DJI drone to break – often beyond repair. Batteries and water are two things that do not mix well.

There has been some confusion that if you submerge a Li-ion battery, it may explore; however, that is almost impossible. With that being said, batteries that have been exposed to water are not safe. The water exposure can lead to corrosion and the potential malfunction of the battery.

The worsened weather conditions can also affect the drone’s stability in the air. In addition, the rainfall can severely affect the radio signal and thus the operating range.

The rain has been shown to have a significant impact on the different radio signals (an effect also known as Rain fade).

Rain – or to be more precise water – is an electrical conductor, but it also absorbs the radio signal.

What to Do If Your DJI Drone Is Caught in the Rain? There is no benefit of flying around in the rain as the water droplets on the camera lens will ruing the footage quality anyways.

But sometimes things may not go as planned, so what do you do then?

You have to get your drone to base as quickly as possible. Unfortunately, even if it should not be used in the rain, you are not left with much of a choice.

There are some anecdotal reports that these drones can be successfully returned to base if there is light rain. The blades spin at such a high RPM that they may potentially be able to provide some small protection from the light water.

If the rain catches you off guard, just take the drone back home as soon as possible and leave it somewhere where there is no moisture to air dry.

Can You Fly Your DJI Drone Over Water?

Officially DJI does not recommend flying your DJI drone over water. But, we all know that some professional photographers do it, so is it a good idea?

Both in theory and practice, you can fly your DJI drone over water. However, as we now know, DJI drones are not waterproof. Nor are they water-resistant. This means that you need to be very careful when flying your drone over or near large bodies of water.

If the drone is close to the water surface, there is an increased risk of it getting splashed by waves, which can cause it to malfunction and fall in the water. Let’s not forget that bird attacks are also not out of the question.

Be especially careful when flying your DJI drone over creeks and rivers and places where it can briefly lose its GPS.

Can a DJI Drone Be Repaired If It Has Been Exposed to Water?

If your DJI drone has been exposed to water, the odds are not in your favor.

Since DJI drones are not waterproof or water-resistant in any way, this means that the potential damage will vary depending on how severe the water exposure has been.

One of the problems that you may have to deal with is that saltwater is extremely corrosive. All the individual parts of the drone should be thoroughly cleaned with distilled water or alcohol solution and left to air dry.

There is also a high risk of battery damage, which can also be a health hazard too. It is recommended to dispose of the battery and have it replaced.

Sometimes the damage can be close to none.

However, other times you may be looking at changing a lot of the electronics on the drone.

Do not open or rapier your DJI drone before speaking with the manufacturer, especially if it is still in warranty.

Can You Make Your DJI Drone Waterproof?

It is going to be close to impossible to make your DJI drone waterproof, but you can certainly make it more water-resistant.

Some companies can add more water resistance to your drone.

There is also a company selling wetsuits for the DJI Phantom series, which is believed to add water resistance to the drone. 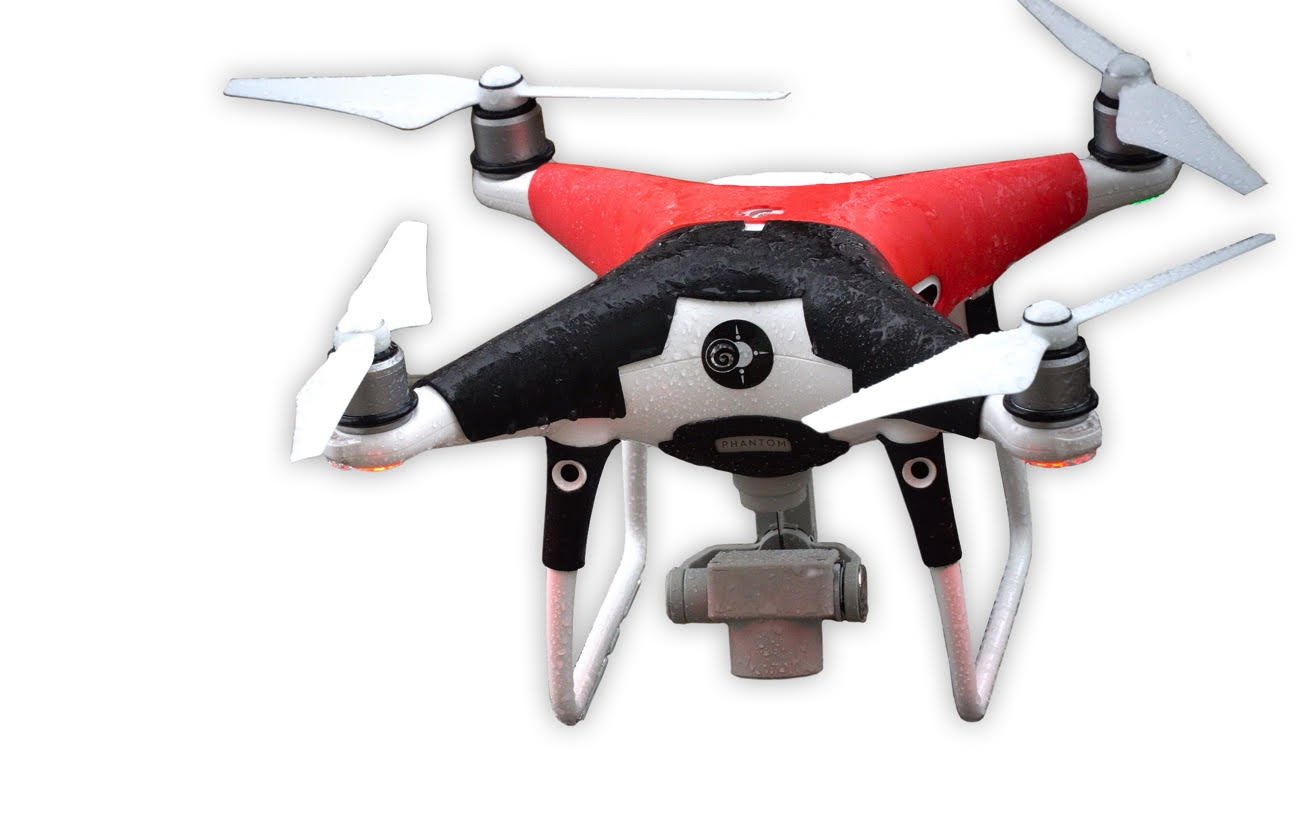 Alternatively, some users report success using hydrophobic or silicone coating to cover the internal electric, battery, and wiring systems. Again this is not going to make your drone waterproof but can add some low levels of water resistance.

Some users have also seen some relative success covering some of the upper vents of the drones. But this can be very dangerous as these vents are there for a good reason. The drone needs a good supply of air to maintain low temperatures during operation.

Keep in mind that any of these actions are not recommended by anyone and should not be done on drones that are in warranty. You are risking damaging your drone and having your warranty voided.

If you want to use your drone underwater or while it is raining, it is recommended to buy a drone that is designed and built for that purpose.